Austin Friars today.  This section of road covers part of  the perimeter of the Friary.    With thanks to Eric, Londonist.

Austin Friars in London, was founded about 1260 by Humphrey de Bohun 2nd Earl of Hereford and Constable of England d.1275.   It was rebuilt in 1354 by Humphrey de Bohun d.1361, Humphrey’s great great grandson (keep up folks!)  6th Earl of Hereford, and Lord High Constable.   The friary covered a large area, about 5 acres and had a resident population at one time of about 60 friars.  It stood on the site of two earlier churches, St Olave Broad Street and St Peter le Poer, the latter was incorporated in the new church and formed the south aisle of the choir.  It must have been affluent being able to afford a new steeple in 1362 to replace the one badly damaged in a storm.

However it was not without its rather scary and unpleasant incidents.  In 1381 during the Peasants Revolt 13 Lombards were dragged from out of the church where they had been sheltering and lynched.  In 1386 a congregation of Lollards inflamed by a sermon,  given in the nearby church of St Christopher le Stocks, on the practices and privileges of Augustinian friars descended on Austin Friary.  The Friary was only saved in the nick of time by the intercession of the local sheriff from being totally destroyed by the mob.

The church stood in the centre of the friary precinct.  Adjoining the precinct was land that was used for rented ‘tenements’.  Some of these tenements must have been fairly grand as the tenants included notables such as Erasmus (who complained about the quality of the wine and left without paying his bill),  Eustace Chapuys and none other than Thomas Cromwell.  Oh the irony – Thomas living cheek by jowl with one of the religious orders  he so despised.  Anyway – as Cromwell rose to fame and fortune he acquired more land from the friary and built one of the largest private mansions in London.   Sometimes his methods to gain more land were not entirely ethical.  We know this because one of the people he rode roughshod over was none other than the father of John Stow who wrote ‘A Survey of London 1598′.  We can still feel the rising of Stow’s hackles over the centuries  as in writing his description of the Friary he added “on the south side and at the west end of this church many fair houses are built namely in  Throgmorton Street, one very large and spacious built,  in the place of old and small tenements by Thomas Cromwell.    This house being finished and having some  reasonable plot of ground left for a garden, he caused the pales of the gardens adjoining to the north part there off on a sudden to be taken down;  twenty-two feet to be measured fourth right into the north of every man’s ground,  a line there to be drawn, a trench to be cast,   a foundation laid and a high brick wall to be built. My father had a garden there and a house standing close to his south  pale; this house they loosed from the ground and bare upon rollers into my fathers garden twenty-two feet,  ere  my father herd thereof.  No warning was given him, nor other answer when he spake to the surveyors of that  work but that their master Sir Thomas commanded them to do so, no man durst go to argue the matter but each man lost his land and my father paid his whole rent which was  six shillings and sixpence for the year for that half which was left.   Thus much of my own knowledge have I thought good to note, that the sudden rising of some men causes them in some matters to forget themselves’.  Really Sir Thomas!   Stow born in 1525 and dying in 1605 at the grand age of 80 lived long enough to see the downfall of Cromwell.  He was described as ‘ a merry old man‘ and I wonder what his reaction was to the death of the man who had treated his dad so disgracefully

Stow made a list of the illustrious people buried in the church.  Among them were:

Humphrey de Bohun, rebuilder of the church in 1354 and buried there in 1361 in the quire.

Edward son of Edward the Black Prince and his wife, Joan the Fair Maid of Kent.  Brother to Richard II.

Edward Stafford Duke of Buckingham executed 1521 – also in the quire

John de Vere 12 Earl of Oxford and thus son Aubrey; both executed in 1462 also in the quire

Sir James Tyrell of Gipping, son of the above,  executed 1502

William Collingbourne  author of  the infamous doggerel ‘Jocky of Norfolk be not so bold, for Dickon thy Master is bought and sold’  – Jocky of Norfolk was of course John Howard,  Duke of Norfolk and Dickon,  King Richard III.  Executed, unsurprisingly,  in 1484; buried in the ‘west wing’?

Sir Thomas Cook, he who was persecuted by the Woodvilles, in-laws to Edward IV.    Died 1478.

Disappointingly Stow did not mention Perkin Warbeck presumably because he did not have a monument.   It’s difficult to see who would have  come forward and paid for one to be made under the circumstances.   W E Hampton suggests the burial site may have been in what Stow calls the ‘West Wing’ which was probably a transept.  We can only speculate if after the many changes, upheaval, fires, bombs  and rebuilding the church has undergone,  that the remains of Warbeck and other burials have somehow survived and remain hidden in vaults, yet to be discovered at some distant future time.  Of course there always remains the miserable thought that he may have been buried outside the church in an unmarked grave.  An archaeological dig was made in 1910 in the area of the cemetery but the expected human remains were never found.  Had they been exhumed and disposed off long before? 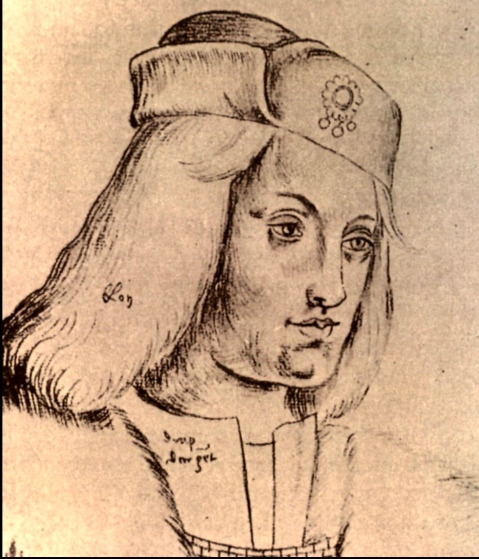 John Stow author of A Survey of London Written in the year 1598.   His monument St Andrew Undershaft in the City of London.  A great debt is owed to Stow in his labours of making the Survey which tells us so much about a long lost London

In 1540 the Bitch known as Karma finally caught up with Cromwell and he was executed, his great mansion seized by the crown – naturally – and sold off along with the friary precincts.  Most of the precincts was demolished but Cromwell’s  mansion became Drapers Hall.  Drapers Hall was destroyed in the destruction that was the Great Fire of London.  Rebuilt in 1667 it was once again badly damaged by fire in 1772.  It was  again rebuilt and later in the 19th century both the frontage and interior much altered twice. 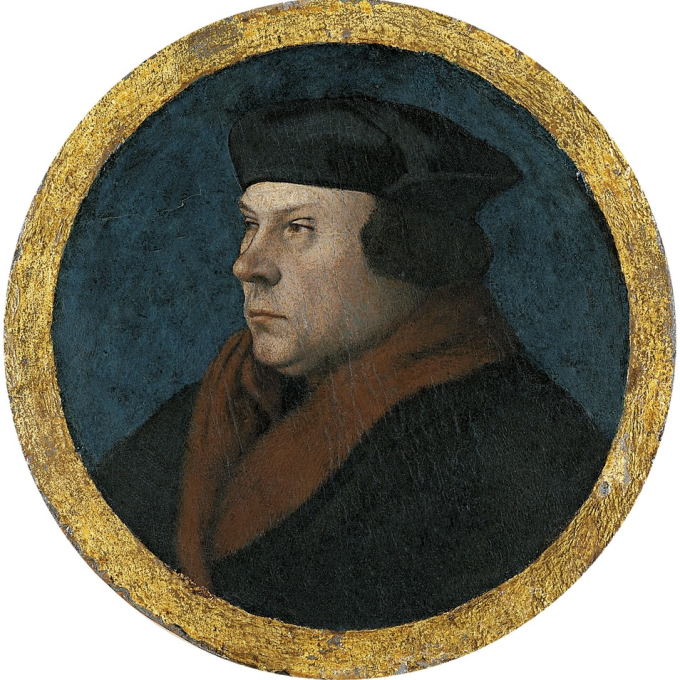 In 1550 the nave of the church was given by Edward VI to the local Dutch Protestant community to serve as their church,  the remaining part used for ‘stowage of corn, coal and other such things‘.  The Marquis of Winchester, who had inherited it from his father ‘sold the monumnets of noblemen there buried in great number, the paving stones and whatsoever, which cost many thousands, for one hundred pounds, and thereof made fair stabling for horses.  He caused the lead to be taken from the roofs and laid tile in place whereof, which exchange proved not so profitable as he looked for, but rather to his disadvantage’ ( 2) 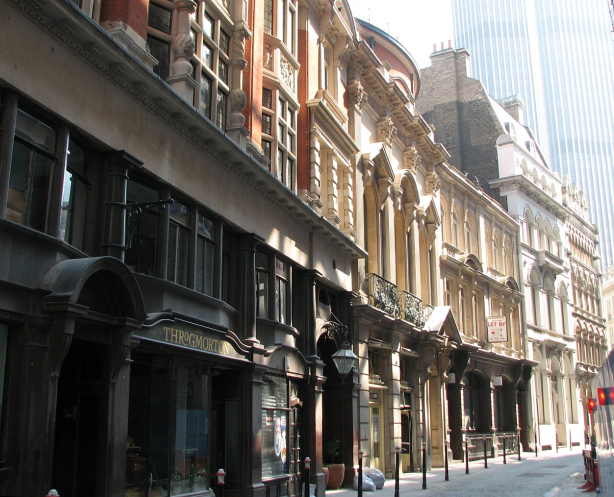 The Dutch church survived the Great  Fire of London 1666 but was badly damaged by a fire in 1862 which seems to have destroyed the nave but left the exterior standing.  The church was then rebuilt, once again, in 1863 but totally destroyed in an air raid in 1940.  It was finally rebuilt yet again in 1950-56. 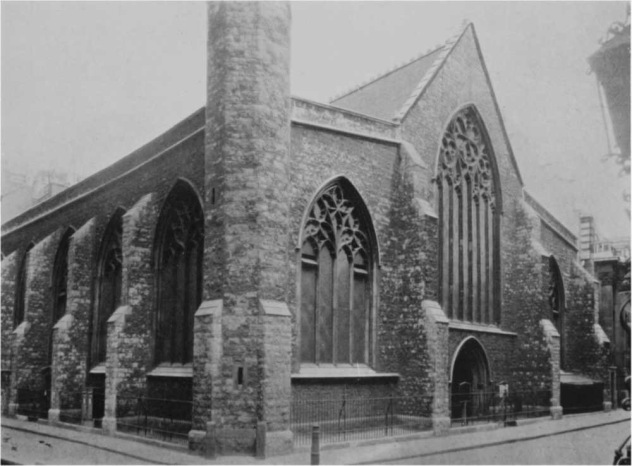 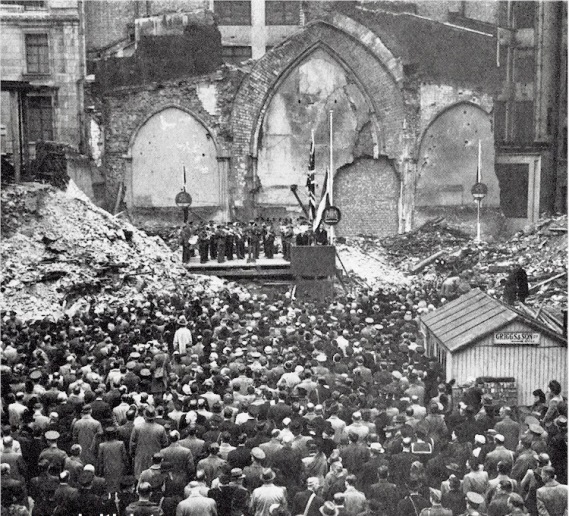 The ruins of the Dutch Church Austin Friars after being bombed  1947.  A service is being held to mark the first anniversary to the German invasion of Holland.

( 1) The Austin Friars article by W E Hampton, The Ricardian.

PERKIN WARBECK AND THE ASSAULTS ON THE GATES OF EXETER