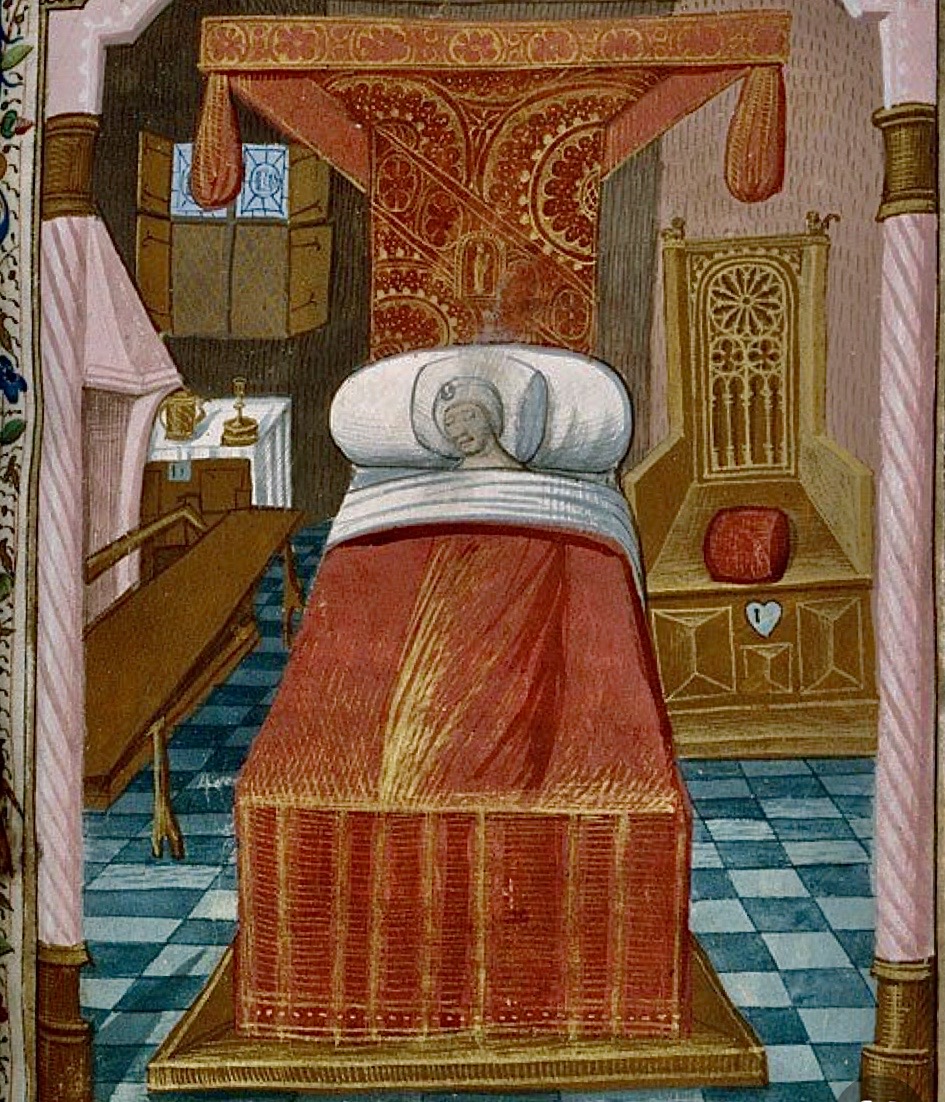 A nice example of a medieval bed.  Note the commode next to the bed complete with a lock!  The side curtains are shown this way in most illustrations.  I thought they may have been bunched up into some type of bag but it has been suggested to me that they were bound up then turned inside out on themselves..which makes more sense. 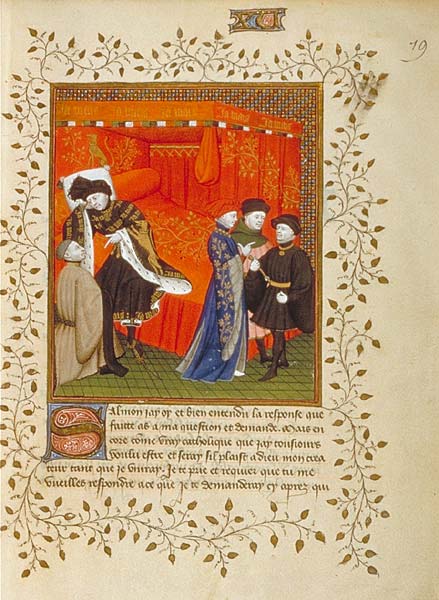 Opulent beds could be used to entertain friends and even shared with  guests staying overnight.  Well at least you would be warm..

In the medieval house the  bed was the most highly prized and expensive item of furniture with frequently  not just the bed but the bedding,  mattresses, pillows, sheets etc., being left in wills although it should be remembered that sometimes ‘bed’ could mean the bedding and not an actual bed.  Some examples were

Alice Thwaites, a widow,   will proved the 16th March 1485.   Left her son Henry a ‘feder bed which he lyed on, j payre of blankettes, j pair of double shetes, j pair of single’.    Alice also left her daughter, Jane, the ‘feder bed being at my house in York, ij coverlettes, j pair of shetes‘.  A ‘feder bed’ was a mattress and not an entire bed by the way…

John Carre, former mayor of York d.1488 thoughtfully left funds for ‘L (50) beddes to be geven to pore men and pore women in the citee of York where the most nede is’. Each of these beds was to have a ‘new coverlet, a new matresse, ij new blankettes, ij new shetes’.  You can imagine the joy and pleasure this bequest brought the recipients who probably got the best night’s sleep they had ever had in their entire lives.

Richard Harecourt, knight, will proved 25 Oct 1486 left to his wife Katherine beddes plus the coverynges of beddes however should she remarry then the beddes, coverynges should go to his son William.  It was wise that a husband made clear in his will exactly what he wished his wife to keep after his death.  Up until 1882 ‘the common law of England took all her real or personal property away from a woman and bestowed it on her husband.  The only chattels exempt from this were the clothes she stood up in. (1)

Elizabeth Rede, widow, will proved 14 October 1486.  Left to her daughter Katherine a ‘bedde of white hanging in the great chamber with the same federbed and blankettes and a grete cloth of oversee werke, vj payre shetes, vj pelows, a other federbed and a materasse.  Her other daughter had the better bed of blewe, a federbed, a bolster, ij payre of shetes, a pair of blankettes and a kovering of murrey’.   To her son Thomas ‘a bedde of white that I ligg (lay?) in.

Anneys Brews, widow of London, will proved 20 November 1480.  Besides ‘shetes, a fetherbed, pylous’ left to her sons and daughters made sure her apprentice Richard Geffrey was left the bedde that he lieth inne that is to saie a materesse, a bolster, ij pair of shetes, a paire blanquettes and ij coverlites..

It leaves a nice and fuzzy feeling that in numerous wills the testator did not forget their servants with examples of instructions that the servants should be paid for some time after,  in some cases up to a year as well as, yes, beds!

Elene Langwith, will made 16th July 1480.  Elene was a silkwoman who had supplied goods for the coronation of Elizabeth Wydeville.  To  Johanne Bynchester, late her servant, Elene left a matrice, a bolster, a hole hangyng for a bedde of rede worstede and my hangyng in the geste chaumber of rede worstede.

The nobility frequently left beds and bedding which from their descriptions would have been sumptuous….

Cicely Nevill Duchess of York, will proved 27 August 1495.   Mother to King Edward IV and Richard III, left to her daughter Ann, my largest bed of baudekyn (a rich embroidered cloth made with a warp of gold silk and a woof of silk) with a counterpoint of the same…

Anne Neville, Duchess of Buckingham,  will proved 31 October 1480.   Sister to the above Cicely,  left several luxurious beds and bedding –   ‘my sonne of Wiltshire  a sparver (a canopy) called a bedde of red velvet partie gold with a counterpoint of skarlett.  ..my doughter Mountjoy  a bedde of rede clothe of gold baudekyn with tappettes of rede worstede, ij pair of shetes, a pair of fustyans, a fetherbedde.’  To her ‘doughter Beamond a bedde of cloth of red Aras without gold the which hyng in the greate chambre at the Myneresse (The Abbey of the Minories, London) a countirpoint of scarlett, ij of my best shetes, a paire of my best fustions, oon of my best fethurbeddes...’  Most charmingly this doughter Beamond also received a ‘pair of basins silvere covered partie gilt that my silf was used to wash inne moost commynly…’ 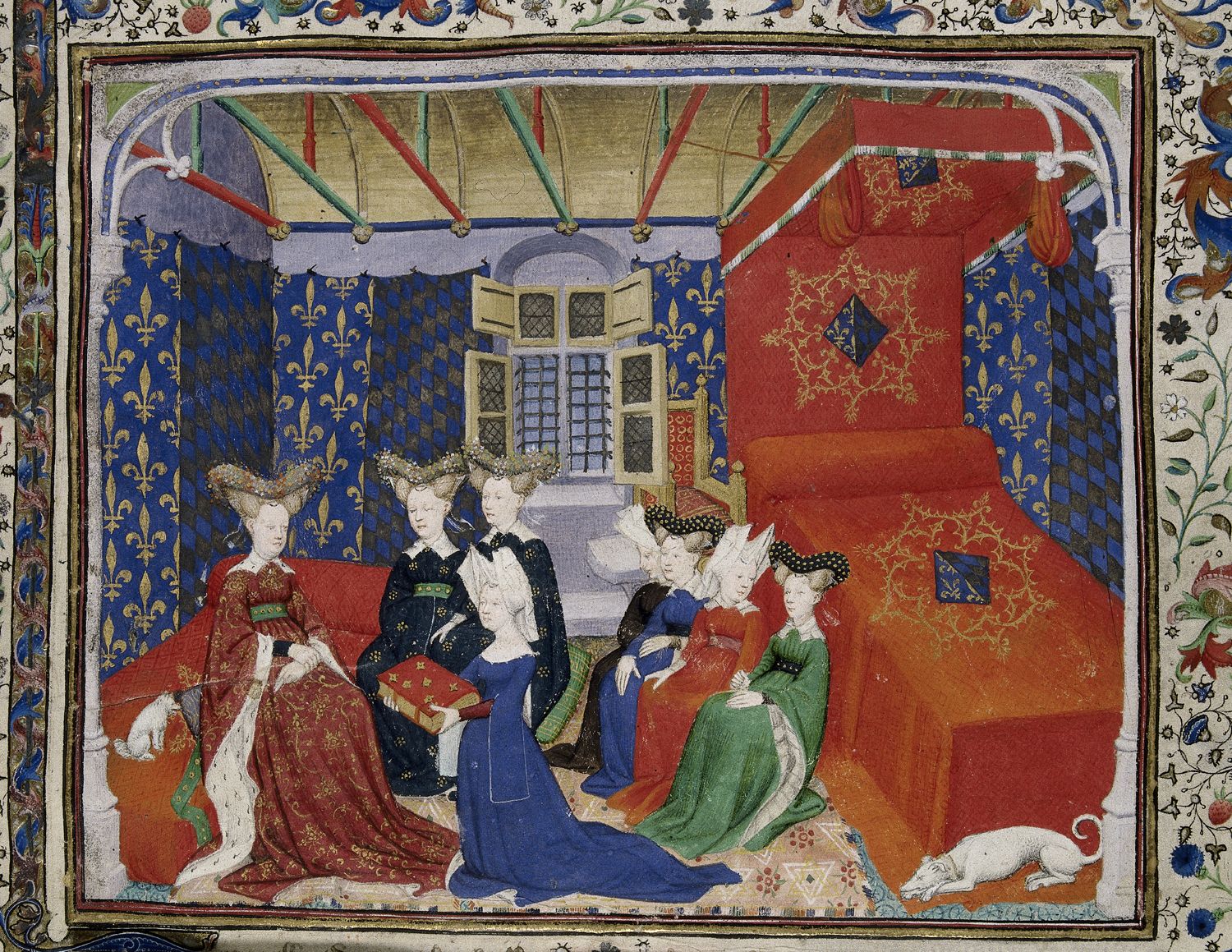 Christine de Pizan presents her manuscript to the Queen of France.  An example of a bed of a noblewoman. 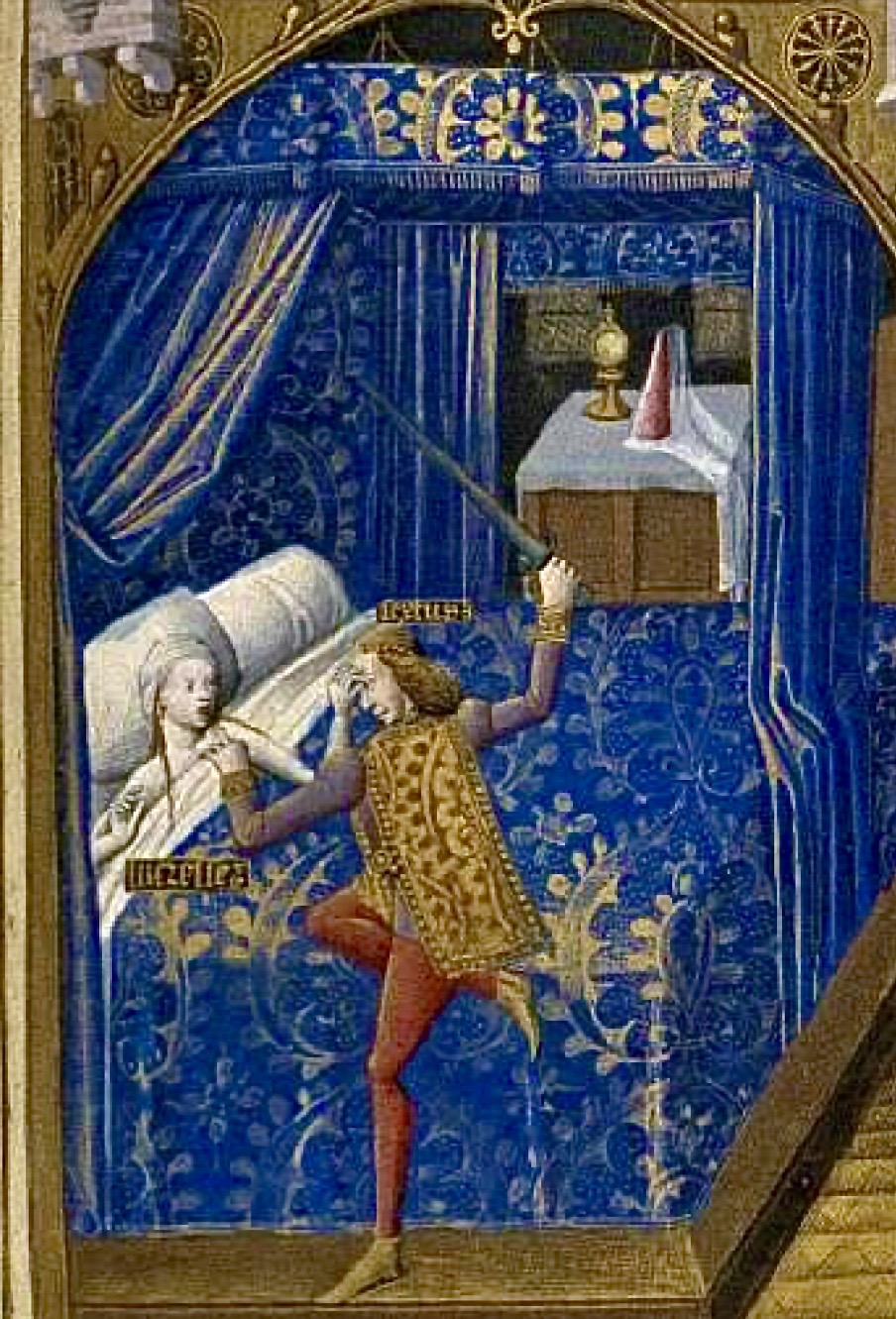 Casting aside a murder appears about to occur this is an example a very, very luxurious bed!

Lastly I haven’t a clue as to what is going on with this lady and gentleman  but, as it shows a medieval bed  I thought  I would just leave it here…

As you may note the illustrations are of all rather grand beds.  Ive found it difficult, no impossible, to find any suitable contemporary illustrations of the more modest types of bed…hmmm.

With many thanks to The Logge Register of PCC Wills 1479 to 1486. Vols I and 2 and the English Wills Proved in the Prerogative Court of York and for Cicely Neville’s will Testamenta Vetusta from which I extracted these wills..

Some links to some interesting articles about medieval beds here , including a glossary, here and here .

THE ANCIENT DOORS OF OLD ENGLAND

The Ancient Gates of Old London

THE RAVENS OF THE TOWER OF LONDON

9 thoughts on “THE MEDIEVAL BED – A PRIZED POSSESSION”