Old London – City of Churches.   Bow Church can be seen to the left.  Part of the The Visscher Panorama of London, 1616. Image Peter Harrington Rare Books.

Orange and lemons say the bells of Saint Clement’s

When will you pay me say the bells at Old Bailey

When I grow rich say the bells at Shoreditch

Pray when will that be say the bells at Stepney

I do not know said the Great Bell at Bow..

This has to be perhaps the most charming of all nursery rhymes but did we, as kids, ever stop to cogitate about the six old London churches whose names rolled off our tongues?  On the whole I don’t think we did.  And yet there can’t be many adults who sung this old rhyme as children who can’t recall the names of those six lovely old churches some of which were destroyed in the disastrous conflagration known as the Great Fire of London in 1666.

St Clement Danes There is some debate about which of two churches is the one mentioned in the rhyme but the consensus is that it is St Clement Danes.  According to Stow the church was named after ‘Harold, a Danish King and other Danes buried there‘. Harold was the son of King Canute by a concubine but we won’t go into that here except to say that after he popped his clogs Harold’s remains spent some time in the Thames after being thrown there by an annoyed brother, Hardicanitus (and no dear reader I’m not making this up!). However a kindly fisherman retrieved him and he was reburied in St Clement Danes churchyard. Another story suggests that the church was named thus after the burial of Danes that were slain in the aftermath of a great looting, murder and general mayhem committed by them. Time passed and the medieval church was partly rebuilt in 1640. The parish of St Clement Danes was heavily hit by the Great Plague in 1665 with 1,319 deaths from that awful pestilence alone (1). However the church managed to escape destruction from the Fire of London 1666 only to fall into such disrepair in 1679, except for the tower, that it was declared unsafe and rebuilt by Sir Christopher Wren. Spire rebuilt by James Gibbs c.1719, with the surviving tower being, happily, incorporated. Interesting members of the congregation included Samuel Johnson and James Boswell.  William Webb-Ellis, was a rector between 1843 and 1855, who as a schoolboy at Rugby ‘with a fine disregard of the rules of the game (football) as played in his time, first took the ball in his arms and run with it, thus originating the distinctive feature of the Rugby game’

The interior was badly damaged during the Blitz in 1941 but miraculously the exterior and tower survived. The remains of the medieval crypt were discovered in 1942. Restored in 1958 and now in use as the Central Church of the Royal Air Force. A Latin inscription now over the main door reads

“Christopher Wren built it 1672. The thunderbolts of aerial warfare destroyed it 1941. The Royal Air Force restored it 1958”

However, it should be noted that the church referred to in the rhyme could very well have been :

St Clement Eastcheap.  First mentioned in the IIth century, repaired in 1632 only to be destroyed in the Great Fire and rebuilt by Wren 1683-7.    The grateful parishioners presented Wren with one third of a hogshead of wine cost £4 2s.  The claim to being the church mentioned in the rhyme is based upon its close proximity to the wharves where citrus fruit from the Mediterranean used to be unloaded although it should be said there were other churches that were even closer.  Yet another church badly damaged in 1940.

St Martin Orgar  is gone.  Situated in Martin Lane and first mentioned 12th century.  Described by Stow as ‘a small thing’.   Popular with 15th and 16th century mayors and their families for a burial place.  Much damaged in the Great Fire,  although the Tower and part of the nave survived, it was abandoned.  French Protestants restored the tower and used it for worshop for over a century.  However it was finally demolished in 1820.

Old Bailey.  The bells referred to are those of St Sepulchre’s, first mentioned in 1137.  Known in  Stow’s time as St Sepulchre’s in the Bailey.   Stow described it  as a fair parish church in a fair churchyard.  Another church gutted by the Great Fire with the outer walls surviving.  Famous burials include courtier Thomas Culpeper executed in 1541 accused of being the lover of Queen Catherine Howard and Captain John Smith d.1631 of Pocahontas fame.  In close proximity to Newgate prison, there is a story that posies were handed to the condemned as they passed the church on their way to execution.  A reminder of a less kinder practice is the hand bell kept in the church which was rung outside the condemned person’s cell the night before execution. 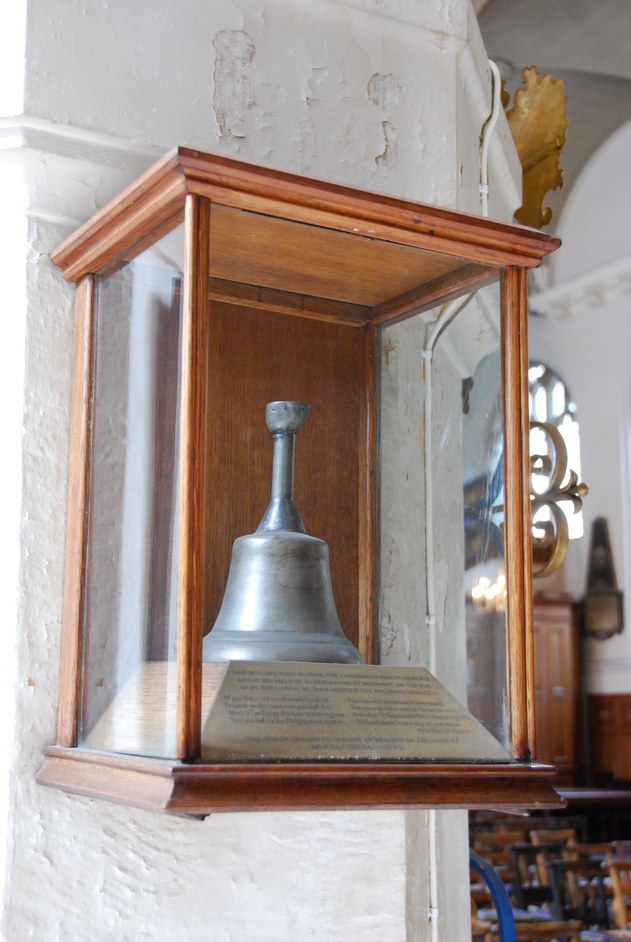 St Leonard’s Shoreditch.  Probably founded 12th century.  In the 18th century part of the tower collapsed during a service.  Rebuilt by George Dance the Elder in 1736 who attempted to build the steeple in the same style as that of Mary-le-Bow.  Another city church damaged during the Blitz but since repaired.  Among the famous buried here is Will Somers d.1560, Henry VIII’s jester and the only man able to lift Henry’s spirits who was in chronic pain through an ulcerated leg. However he did sometimes overstep the mark which resulted on one occasion in Henry threatening to kill him with his own bare hands.  Will managed to outlive his tyrannical boss and a plaque marks his burial in St Leonards 15th June 1560.

Henry VIII and his fool, Will Somers who was buried in St Leonard’s Shoreditch

St Dunstan’s and All Saints Stepney.  The oldest of the Orange and Lemon Churches.  A church has stood on this site for over 1000 years, the existing building being the third church on the site.  One of its oldest bells still in use was cast in 1385.  The churchyard was enlarged to cope with the massive amount of deaths – 6,583 in 18 months –   during the Great Plague of 1665.  A disastrous fire in 1901 caused a large amount of destruction including an organ carved by Grinling Gibbons.  The funds were raised to repair the church although of course some of the features such as the 15th century roof were irreplaceable.  Fortunately St Dunstan’s survived the Blitz unscathed although the surrounding areas suffered greatly due to the proximity of the docks.  For anyone wanting to read more about St Dunstan’s here is a link to an interesting article. 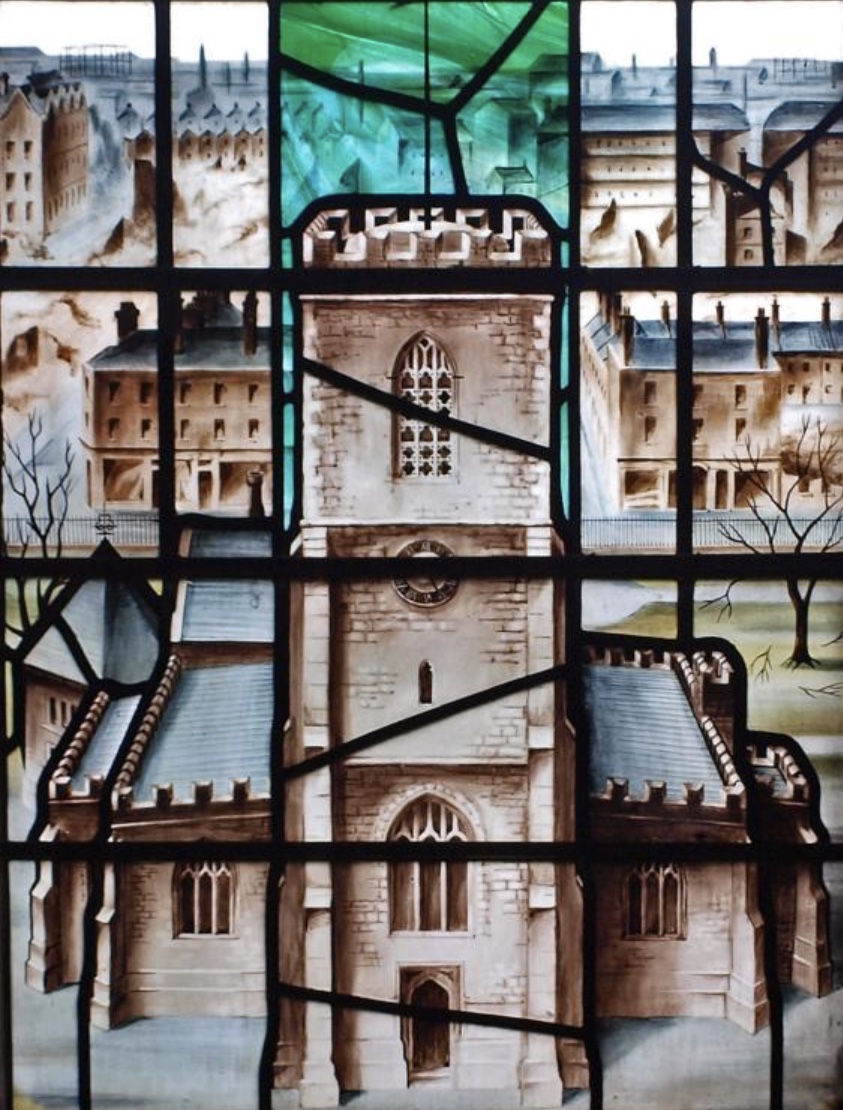 St Dunstan’s, a survivor amongst the destruction of the Blitz.  Modern window by Hugh Easton.  Photo thanks to david.robarts

St Mary-le-Bow Cheapside.  Almost totally destroyed in the Great Fire and rebuilt by Wren.  Norman crypt survived the Fire and was allowed to survive the rebuild by Wren.  Pevsner wrote   ‘The glory of the church is its steeple,  the proudest of all Wrens steeples.   Built in 1678 at a cost of £7,388 as against £8,033 for the rest of the church.   It is a triumph of the skill of Wren’s masons Thomas Cartwright and J Thompson that it withstood the fire inside the steeple and the crashing down of the bells during the Second World War (2).  Bravo gentlemen!  The bells of this church are the famous bells that according to London folklore persuaded Richard/Dick Whittington as a young lad to turn around, turn around and return to London!  Which he did.  Became Lord Mayor and a great doer of many, many good deeds.   The bells nowadays can be heard tolling on every quarter of the hour.

So dear reader we have come to the end of our armchair perambulation of the Orange and Lemon churches of Old London.  I have only been able to touch briefly upon the rich history of each church due to time and space but if you wish to delve deeper I can thoroughly recommend A Survey of London by John Stow 1598 and Pevsner’s Cities of London and Westminster.

THE RAVENS OF THE TOWER OF LONDON

ROYAL PECULIARS AND THEIR PECULIARITIES

THE ANCIENT DOORS OF OLD ENGLAND

3 thoughts on “THE ORANGE AND LEMON CHURCHES OF OLD LONDON”