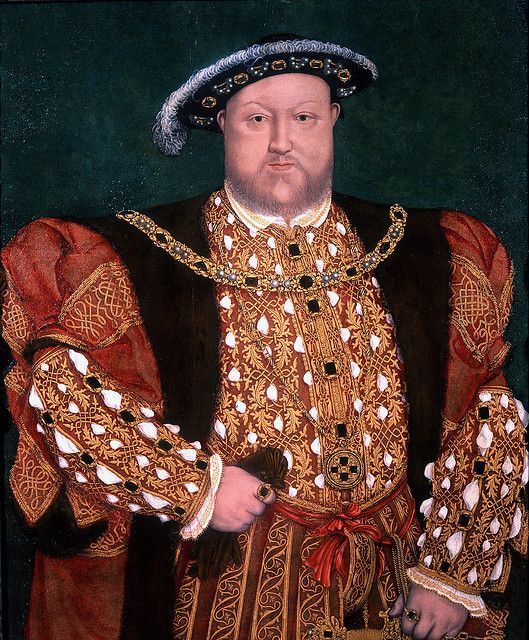 Henry VIII, known as the Hamilton Portrait and once owned by the Duke of Hamilton, this portrait used to be at  Holyroodhouse.  Philip Mould.

The deaths of all three Tudor kings were protracted and wretched.  Whether this was down to Karma, bad luck (or good luck depending on what way you look at it) or just the lamentable medical treatments available at the time,  I know not.  Perhaps a combination of all three.  But I want to concentrate here on the death of Henry VIII.

‘The Death of Kings’ by Clifford Brewer T.D. F.R.C.S is an interesting read and covers the death of Henry in detail.   The title is self explanatory, the book being a ‘medical history of the Kings and Queens of England’.   I have drawn heavily on the book for the information I quote here concerning Henry VIII, who by strange coincidence died on the 28th January being the date on which his father Henry Tudor was born.

‘Henry, long since grown corpulent, was becoming a burden to himself and of late lame by reason of a violent ulcer in his leg, the inflammation whereof cast him into a lingering fever, which little by little decayed his spirits.  He at length begun to feel the inevitable necessity of death. Goodwin Annales of England.

Henry’s symptoms are too numerous to detail here and death must have come as somewhat of a relief to him after much suffering.  The actual cause of death is still debated as is did he suffer from syphilis.  Brewer points out there is no proof either way and that although , if he had,  it could explain some of the ‘happenings in his reign‘ there are points which contradict this.  For example there is no evidence that his long term mistress Bessie Blount suffered from syphilis which she surely would have contracted from him (neither did  their son Henry Fitzroy ever show signs of congenital syphilis).      The same can be said of Mary Boleyn or any of his wives.

This is believed to be a bust of Henry as a child.  What a mischievous little chap he was, the little stinker…..

He is recorded as having suffered from a bout of malaria with recurrences throughout his life although these did not seem to incapacitate him too much.  Indeed he seems to have enjoyed  robust health engaging in ‘strenuous exercise’ and indulged in many jousts and tournaments both on foot and on horse. He did however have two lucky escapes both of which could have been fatal.  One was a jousting accident where his brother-in-law, the Duke  Suffolk’s lance shattered his helm and he was very lucky not to be blinded or even killed’.  Then in 1525 whilst  trying  to vault a very wide ditch using a pole, the pole broke and he was thrown headfirst into the mud where,   unable either to get up or even breath,  his life was  saved by a footman.  .

This jousting injury might account for the belated development of several symptoms.   Henry was to alter in appearance and put on a considerable amount of  weight,  ‘his face become moonlike,  burying his small eyes in a puffy face and accentuating  his small mouth’.  After the execution of Anne Boleyn,  Henry became even more prone to fits of temper and instability.  His  great increase in weight made it difficult for him to take exercise. Henry also developed an ulcer on his leg and  Brewer speculates that this ulcer,  which was very offensive,  ‘and a trial to his attendants‘  could have been either a varicose ulcer or the result of an injury received whilst jousting which damaged the bone leading to osteitis.   This could have led to further complications – amyloid disease in which a waxy  material is laid down in the liver, kidneys and elsewhere.  Not a pretty picture.  Poor Henry.

Henry,  as he got older,  became subject of violent attacks of temper and periods of loss of memory.   On leaving London on one occasion he ordered all the prisoners in Tower to be executed.   His character become more and more unstable and by 1546 Henry had become  grossly overweight,  his legs so swollen,  due to severe oedema,  that he was unable to walk and he was moved from place to place by means of lifting apparatus. 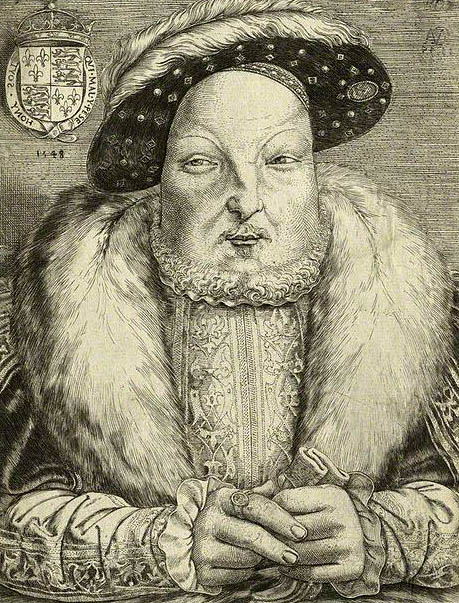 Henry towards the end of his life showing the  abnormality on the side of his nose which might indicate a gamma that had healed with scarring.   Cornelis Metsys line engraving 1545.

‘Towards the end of January 1547 he begun to suffer from periods of partial unconsciousness alternating with periods of alertness.  He was probably passing into a uraemia coma.  Realising he was dying he sent for  Cranmer but by he time he arrived he had lost the ability to speak.  Grasping Cranmer’s hand in his,  he pressed it when asked if he  repented his sins.    This was taken as Henry’s repentance and he ‘died in grace’ ‘  – ummm I don’t think it quite works like that!  .  However, his huge and offensive body was transferred, with some difficulty,  into his coffin.  He was then taken to Windsor to be laid to rest beside Jane Seymour.  However that is not the end of the story for it is said that his coffin burst a leak and the church was filled with a ‘most obnoxious odour’.  And so Henry passed ignobly from this life and  into history and the short reign of his son Edward VI commenced.    As it transpired Edward’s death was to be perhaps  even more awful that that of his father.   But that dear reader is another story.

HENRY VIII’S COFFIN IN THE VAULT HE SHARES WITH JANE SEYMOUR AND CHARLES I.   ST GEORGE’S CHAPEL, WINDSOR.

4 thoughts on “THE DEATH OF HENRY VIII”