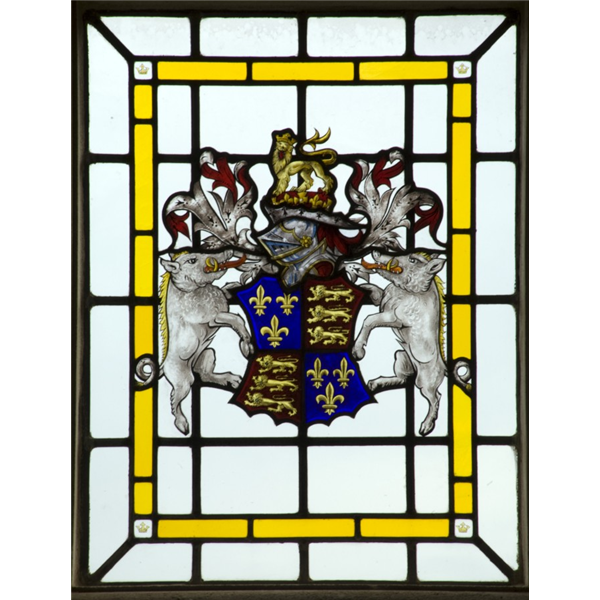 The arms of Richard III in Crosby Hall

On June 5th 1483 the Duchess of Gloucester arrived in London and joined her husband at Crosby Place (1).  She had left both her small son and and  home at Middleham to join her husband, who had been staying  until then, with his mother at Baynards Castle,  and on her arrival they would have had much to catch up on covering the drastic events which had taken place since she had last seen Richard.  Much has been written about these events elsewhere and I would like to focus here on the place that would be their  home for a short while, Crosby Place, and the man that built it. 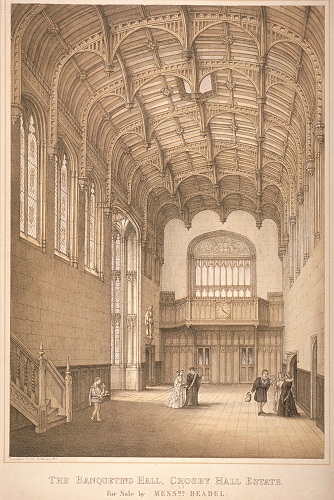 A print of Crosby Hall before the extra floor was added.

Crosby Place was built by Sir John Crosby,  died 1475, in Bishopsgate on land he had leased from Alice Ashfed,  prioress of the Convent of St Helens,  on a 99 year lease for an annual rent of £11.6s.8d, on land previous used for tenements/messuages.

Sir John , a soldier, silk merchant, alderman and MP, came from a staunch Yorkist family and was knighted by Edward IV at the foot of London Bridge (Bridge Foot) on 21 May 1471 after having driven off the  attack  on that bridge by the Bastard of Fauconberg.

He lies with his first wife Agnes. died 1466, in St Helens church, Bishopsgate, where their  splendid effigies, well preserved, he with a  Yorkist collar and Agnes with two dogs at her feet can still be seen,  His second wife , Anne nee Chedworth,  was related to Margaret Chedworth, John Howard Duke of Norfolk’s second wife, Anne’s father being Margaret’s uncle.  At the time of Sir John writing his will,  Margaret, his wife’s cousin was living with them.  Anne his second wife survived him and married John Rogers esquire, which probably accounts for her being buried elsewhere and her effigy not added to the tomb (2) 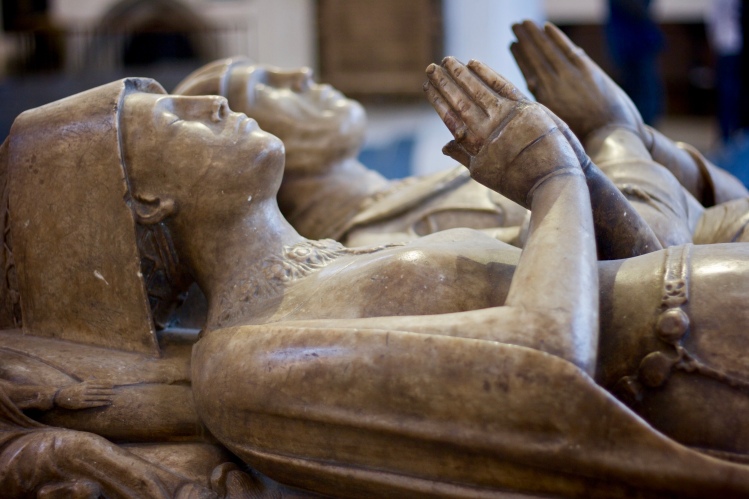 Sir John Crosby and his first, wife Agnes.  Their effigies  on their tombs, St Helens, Bishopsgate. 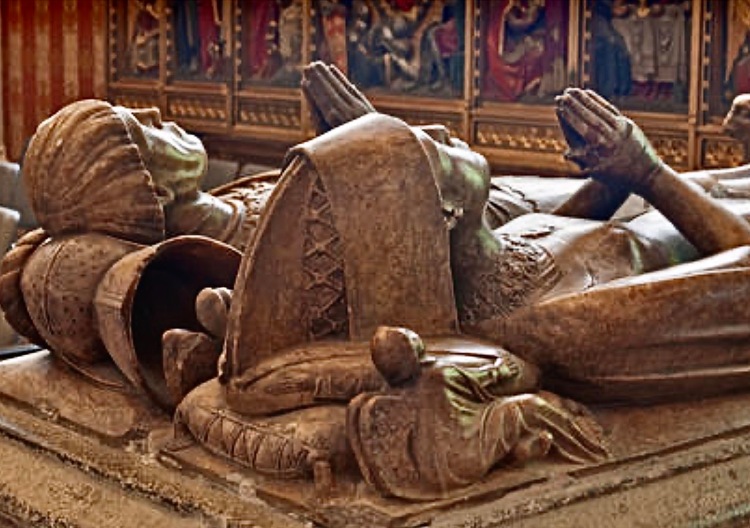 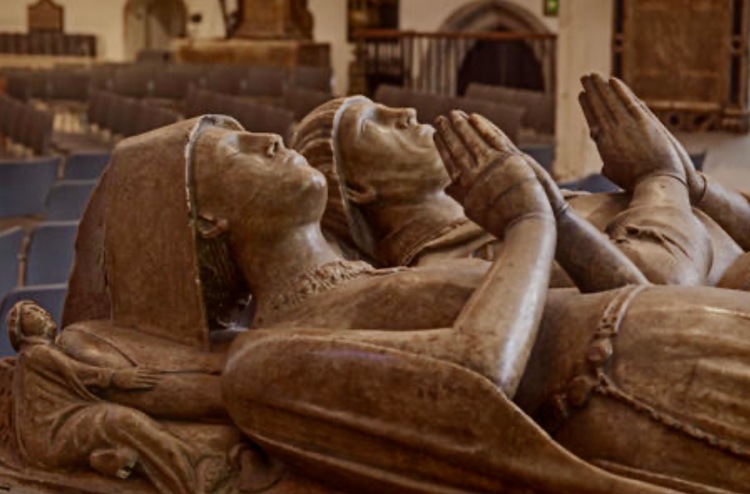 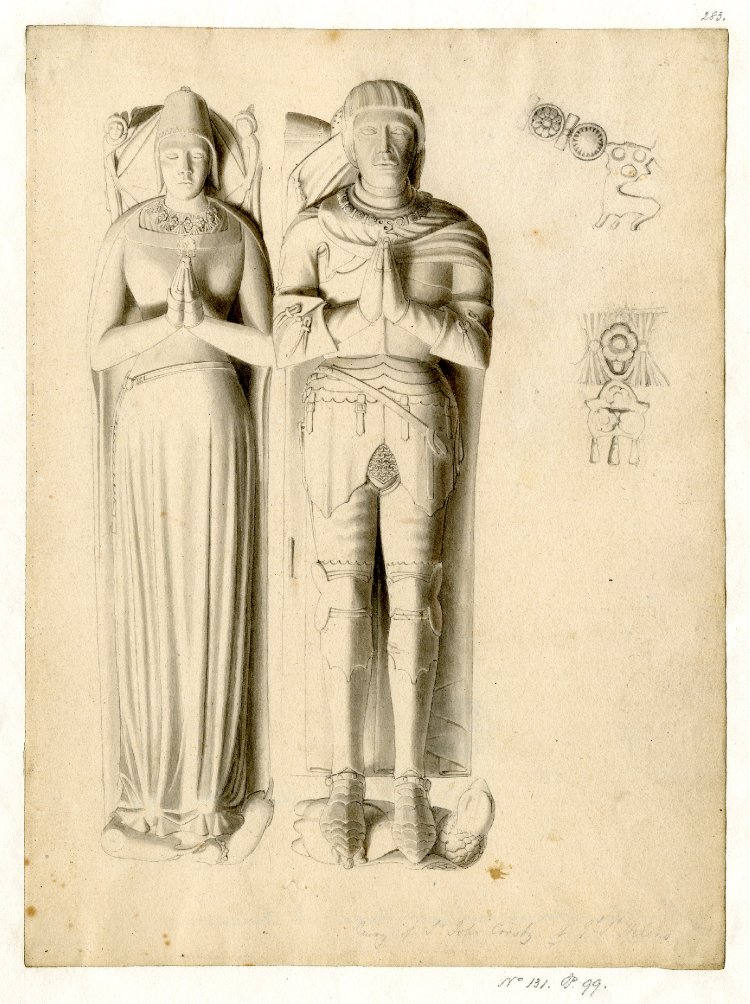 Sadly, Sir John, who died in 1475 did not live long to enjoy his stunning home which was completed in 1470,  and  described by Stow as ‘built of stone and timber, very large and beautiful and the highest at that time in London’(3)

There is some debate as to whether the house was then either rented to Richard Duke of Gloucester or purchased by him.   Stowe wrote that Richard had ‘lodged’ there although there are others of the vein that Richard had purchased it (4) .  However I am confident enough to say that I go along with Richard only leasing it.   For surely if it had belonged to Richard it would have been taken by Tudor when he usurped the throne and gifted  to either one of his acolytes or his mother who was known for her acquisitiveness. Certainly  Sir John’s will provided unconditionally that his wife,  Anne, should have the lease of Crosby Place for her life.  It would seem that Anne was pregnant at the time of Sir John’s death (see his will) and  that this son, John was  dead by 1476 and dying without issue,  Crosby Place etc., then was left to Sir John’s cousin, Peter Christmas,who also died without issue (5) and thus Crosby Place passed out of the hands of the Crosby family. 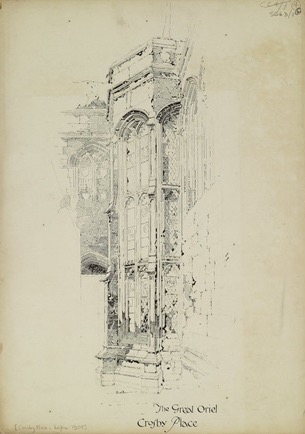 Old drawing of the oriel window 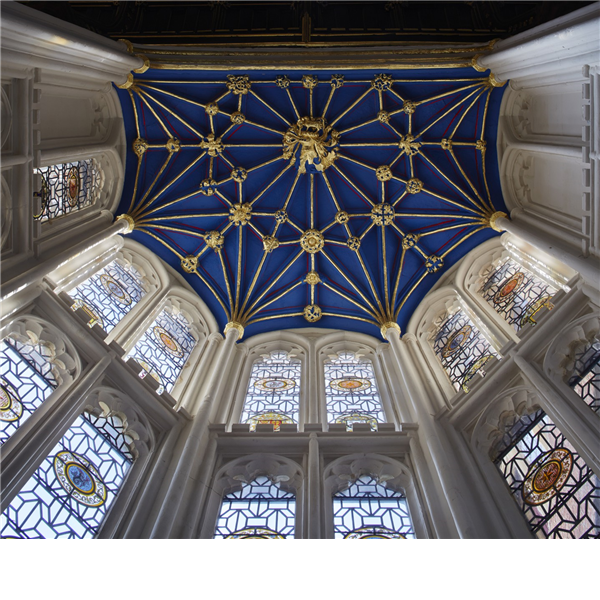 In the 17th century it became the home of the East India Company until a disastrous fire in 1672, the first of several,  left only the Great Banqueting Hall and Parlour surviving.  These buildings then slowly declined after that until in 1910 the Hall was saved from demolition  and removed brick by brick to its present location in Chelsea, finally passing into private ownership in 1989.

Returning to the past,  after Anne Neville’s arrival in London , Richard seems to have spent his time between his mother’s house Baynard Castle and Crosby Place, using Crosby Place for meetings.  It has been speculated that it was at Crosby Place that Richard was offered the crown by the Three Estates rather than at Baynard’s Castle.

5) Crosby Hall, a Chapter in the History of London Charles W F Goss 1907