Here is a link to an interesting map and article on the murder hotspots of medieval London.  Click on a dot and details pop up of that particular murder.

Most of the culprits either just simply disappeared pronto or skedaddled into sanctuary and  frustratingly the outcomes are not shown.  The vast majority of the victims were male,  sadly one a small  child,  John de Burgh, aged 5 years old who died after being ‘cuffed‘ after he stole a small amount of wool which he had hidden under his hat.    One of the more audacious was the murder of the gatekeeper of Newgate Gaol, Nicholas at Mill, who was stabbed to death by two men who broke into Newgate to do so.

Its seems you were quite vulnerable if you were a clerk in holy orders, several of them being bumped off.  Although priests seemed to be susceptible to ending up as murder victims  they could actually give as good as they got with one priest, Alan de Hacford murdering Walter de Anne, the man he shared his lover, Alice de York with,  after finding Walter and Alice sitting together.  For reasons unknown Alice aided and abetted Alan, the pair of them fleeing afterwards.

Loud music then as now could lead to altercations with fatal results.   In May 1324, Thomas Somer,  a minstrel.   incensed Thomas of Lynn, by playing outside his home after dusk.  The householder Thomas chased Somer intending to bash him with a door-bar.  After Thomas caught Somer and struck him, the musician pulled out a knife and fatally injured Thomas. 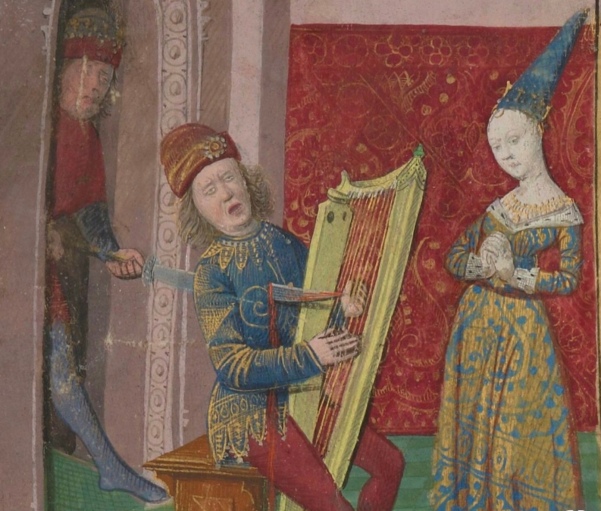 In this picture its the turn of musician to get it…

A few of the culprits were female including a fishmonger stabbed to death by his mistress.  Surprisingly she didn’t batter him to death  with a piece of cod! – joking – while another woman, a prostitute by the name of Agnes ‘Houdy Doudy’ killed another woman, Lucy,  the pregnant wife of Richard de Barstaple, by ‘striking her on the belly with fists and knees’.  Yet another woman, a beggar known as Nicola from Cardiff,  drowned her 3 month old baby,  Alice,  while ‘surreptitiously pretending to wash the child’ in a ditch.

Reasons for people getting murdered varied quite a bit from a suicidal man, John Pentyn,  bashing his would be rescuer over the head  with an iron stave to Roger Styward,  who as a result of throwing eel skins in the street,  received a fatal kicking.  Servants died protecting their masters belongings.  A violent altercation about a horse led to a murder while a planned gang rape ended in complete and utter mayhem.

Royalty was not exempt from the fallout of murder – John Gremet a groom of the kitchen of Queen Philippa – was murdered by another royal servant, Peter Tremenel.

A total of 142 murders are detailed sourced from the Coroners’ Rolls and credit and thanks to Prof Eisner at the Institute of Criminonology, University of Cambridge.   Enjoy!

One thought on “Murder and mayhem in medieval London”