Well that old wheel of fortune could certainly whizz around and no more so than in the lives of the noble women from the turbulent times we now know as the Wars of the Roses.  An example of one of these ladies  is Ann Herbert nee Devereux Countess of Pembroke.  Ann was the daughter of Sir Walter Devereux and born about c1433.   In 1449 Ann was married to William Herbert Earl of Pembroke c.1423-1469 and  with whom she had at least 10 children including William jnr and Maud.  William jnr would go on to marry Elizabeth Wydeville’s sister Mary and after her death, Richard III’s illegitimate  daughter Katherine –  I will get back to William jnr and Katherine later – while her father left instructions in his will that Maud was to marry, ‘Lord Henry of Richmond’ ie Henry Tudor. (1 ) As we know this marriage never came about, Henry marrying Elizabeth of York and Maud, Henry Percy Earl of Northumberland.  William had received the custody and marriage of Henry Tudor on the  12 February 1461 when Henry was 4 years old and had been sent to be brought up in Ann’s household at Raglan Castle with the rest of the Herbert children.  Ann must have been a kind and loving guardian as when Henry Tudor usurped the throne as a result of the  tragic outcome at Bosworth one of his first actions  was to send for Ann.  But we gallop away here and should return to Ann’s earlier life.  Both Anne  and her husband, although from staunch Yorkist families (both Herbert, and his  father  served in France, his father in Richard Duke of York’s retinue) had once supported Henry VI but as the tricky situation between the king, who was mentally unstable, and York developed and grew ever more turbulent, Herbert his ‘loyalties strained’ threw in his lot with York – and to be perfectly honest who can blame him – but I digress.  Herbert assured York in May 1454 that he was ‘noo monis mon but only youres’ (2)  It must have been a worrying time for Ann as she sat in Raglan castle with her brood of children and of course young Henry, as well as other ladies of the nobility, as their menfolk thundered about the countryside, sometimes losing, sometimes winning and sometimes off into exile only to return, envigorated and ready for more.  In her case, at that moment in time, her husband was victorious and although York was to lose his life at Sandal Castle his son Edward would go on to win a decisive victory at the Tewkesbury  and finally claim the crown as his own.  This led to the glory years for Ann and her husband.  He was to become a cherished and well rewarded follower to the young king.  Rewards were showered upon him including Privy councillor to the new king,  Chief Justice of North Wales for life,  Knight of the Garter,  custody of the Stafford lands during the Duke of Buckingham’s minority and Lordship of Pembroke.  Created Baron Herbert he became  ‘massive wealthy’ his income amounting to £3200-3300 per annum.  Heady days indeed for  both William, who had became known as Edward’s ‘master-lock’ and Ann.

However around the wheel spun and things took a dangerous and downward turn when the Earl of Warwick and the King’s brother George of Clarence, increasingly  alienated from Edward, enraged by the rise and rise of the voracious,  parvenu Wydevilles,  and who can blame them, rebelled.  Unfortunately for Ann, her husband was now as heartily hated by Warwick as much as the Wydevilles, but perhaps for somewhat different reasons, and his  luck had begun to run out.  William’s history with Warwick went back a long way and indeed he had once been Warwick’s Steward and Sheriff of Glamorgan in 1449-53. (3)   No doubt one of the reasons for Warwick’s hostility towards his erstwhile friend was when Edward made the decision In 1461 to make William chief Justice and Chamberlain of South Wales as well as transfer to him the offices and custody of the estate all previously granted to Warwick.  And so friends that had once rode together,  fought together and perhaps even laughed  together become mortal enemies with devastating results.  This was the tragedy that was the  Wars of the Roses.   The  wheel was spinning and after a skirmish at Banbury in  1469   an argument ensued about billeting between William and Humphrey Stafford Earl of Devonshire.   Some have said the argument was about a woman, but come on, is it likely a woman would be a priority for them with the battle of Edgcote about to take place the next day!    However after Devonshire stormed off in a fit of pique taking his archers with him, William  was left in a vulnerable position.  Although stories of how courageously he and his brother, Sir Richard of Colebrook, both fought wielding poleaxes, the fight was lost.  Sir Richard is said to have twice passed through the ‘battail of his adversaries’ armed with a poleaxe and ‘without any mortal wound returned’ (4).  Both were taken prisoner and executed the next day.   With  his impending death staring him in the face, William wrote out his last will,  tender, poignant, almost a love letter to his clearly beloved wife.

‘..And wyfe, thwt ye remember your promise to me, to take the ordre of wydowhood, as ye may be the better mayster of your owne, to performe my wylle, and to help my children, as I love and trust you, &c…. Wife pray for me, and take the said ordre that ye promised me as ye had in my lyfe, my heart and love….’

’’Item, I to be buried in the Priory of Bergavenny under charge; bytwene my fader’s toumbe and the chancell, and the cost that should have be at Tynterne to be set upon the chancell, as my confessor &c. shall say; and you my wife and brother Thomas Herbert, &c.’

It can only be imagined how Ann’s tears fell when she read this.  She adhered to her late husband’s wishes and never married again.  William’s wishes in regard to his place of burial were not carried out because  for some reason lost to us now, he was buried at Tintern Abbey and not the Herbert Chapel, Priory of Bergavenny (Abergavenny) close to his parents as well as his brother Sir Richard Herbert of Colebrook and his wife Margaret.     A large chest tomb near the high altar at Tintern  destroyed during the Dissolution is said to be that of William and Ann although William Hampton in his book Memorials of the Wars of the Roses goes with Abergavenny  being the place of burial as nominated in the will.  It must be said that there is no sign of a tomb for William and Anne in the Herbert Chapel at Abergavenny. 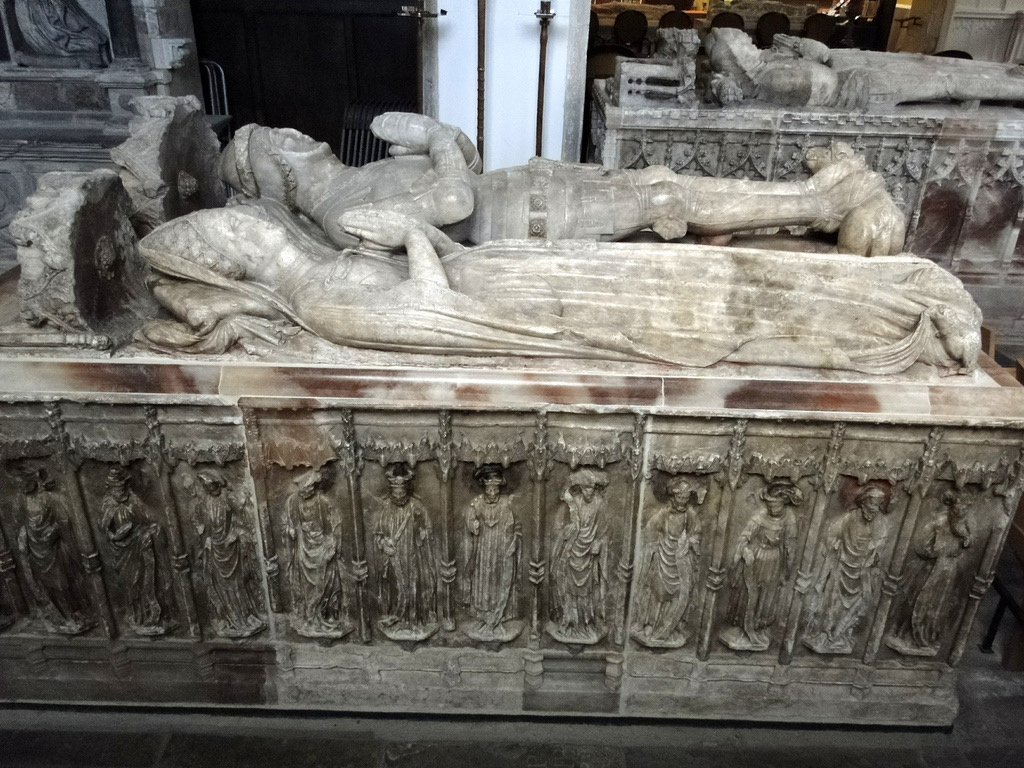 William’s parents, Sir William ap Thomas d.1445 and  Gwladus/Gladys Gam d.1454, effigies on top of their tomb in the Herbert Chapel, Priory of Abergavenny, where William requested to be buried. Sir Richard of Colebrook, William’s brother and executed with him also lies buried here with his wife Margaret.  Gladys Gam was the daughter of ‘Davy’ Gam made famous by Shakepeare’s mention of his name being among the English dead at Agincourt in his play ‘Henry V’. Photo @Rex Harris 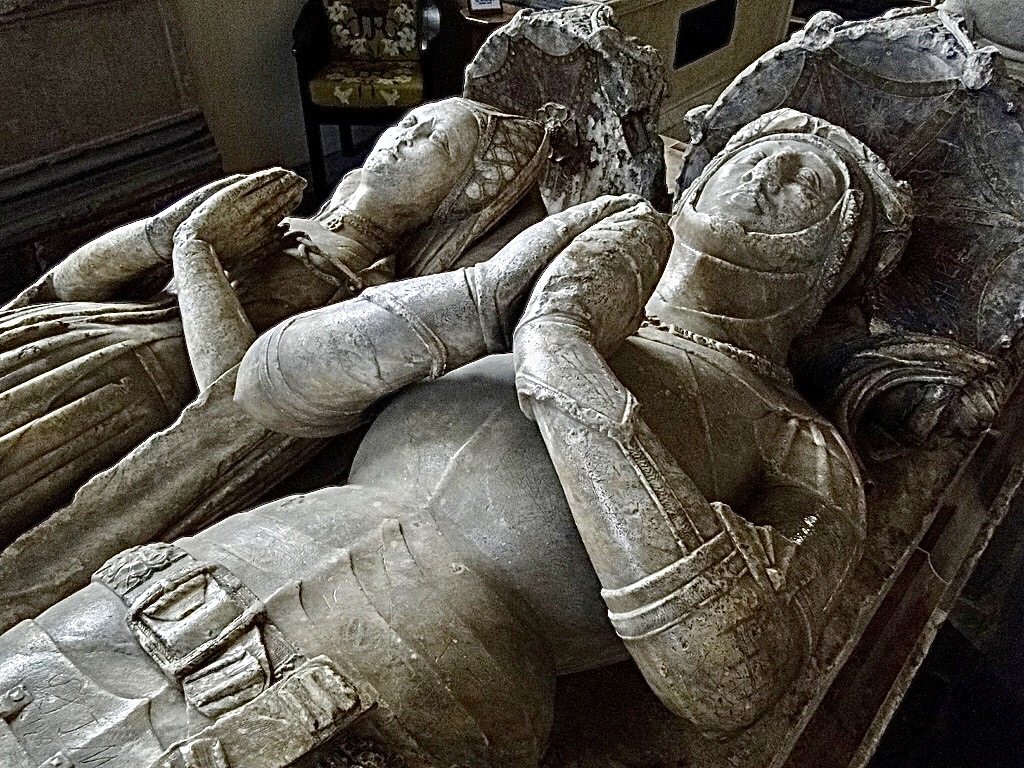 William Herbert’s paternal grandmother Gwladys/Gladys Gam was a celebrated beauty in her time and known as the Star of Abergavenny.  A Welsh poet described her as ‘like the sun – the pavilion of light’.  Photo @ Rex Harris

After her husband’s death, followed by the death of his nemesis Warwick, little is known about Ann in her widowhood.  However on the death of King Edward and Richard III’s arrival on the throne, her son William jnr, now a widower was honoured by Richard when he was given the hand of the kings daughter, Katherine in marriage.  This marriage was of short duration as it appears Katherine died young and without issue.  What would have become of Ann’s daughter-in-law after Richard’s death at Bosworth is anyone’s guess.  At the very least she may have been an embarrassment to the Herberts.  Indeed William Hampton posed the question was Katherine Plantagenet the reason why Ann was summoned by Henry Tudor in the aftermath of Bosworth?  We  know now that Katherine was laid to rest at St Jamesgarlickhythe close to the London home of the Herberts, William was laid to rest in 1491 besides his first wife Mary Wydeville at Tintern Abbey where, it is said, both his parents lay buried together.

Raglan Castle.  Where Anne would have spent most of her time raising her children and the young Henry Tudor.  Note the resident cat!