Way back in  1980 the late Jeremy Potter,  Chairman of the Richard III Society,  and producer Richard Drewitt discussed King Richard III at length and an idea was born.    That was to put Richard  on trial for a heinous murder he had been  held responsible for over the centuries,  that of the murder of his brother Edward IVs young sons.   I’ve always found this strange as is it not the responsibilty for the accusers to prove the guilt of someone and not the other way around?  Anyway, this ‘germ‘ of an idea took root and after numerous obstacles the trial finally took place and was recorded on the 21 February 1984.

The judge was Lord Elwyn Jones of Llanelli and Newham, who had served as Lord Chancellor in 1974-79 and had acted as a prosecutor at the war crimes trial at Nuremberg.  Lord Elwyn Jones made the comment ‘As the great historian Lord Acton wrote history is a judgement seat and Richard III is to be tried before the bar of history’.

The services of two Queen’s Council  of the highest calibre were secured who received permission from the  Bar Council to appear with the instructions they were to remain anonymous and not to wear their wigs although permission was granted for them to be able to wear their black gowns. To preserve their anonymity the council for the prosecution used his mother’s maiden name of Russell and the defence counsel chose Dillon ‘a treasured family name’.  The researchers met frequently with Mr Russell, not so much with Mr Dillon,  partly because he was ‘busy with cases in distant parts of the country and partly because he preferred to play his cards close to his chest. So much so that during the trial he made at least one telling point that had not emerged in discussions with any of the witnesses, the production team or even from the literature of the period‘.  Both barristers were supplied with copies of all relevant contemporary documents such as the Second Continuation of the  Croyland Chronicle and Mancini’s De Occupatione Regni Anglie per Riccardum Tercium, The  Usurpation of King Richard III with assessments of their value and significance.

They also received background dossiers on the leading characters in the drama.   As the  barristers begun to develop their cases they requested briefs on questions that were puzzling them such as the taking of sanctuary in the 15th century, the power of Parliament at the time, the consequences of attainder and the autumn rebellion of 1483.  The stage was beginning to get set…

What of the witnesses?   Academic historians were approached although first attempts proved discouraging.   The first Tudor expert they approached, Professor Geoffrey Elton,  refused to have anything to do with the programme on the grounds that ‘as far as he and most historians were concerned Richard III  was a gangster who had killed the princes‘ and thus further debate was pointless.  Not all historians were so unhelpful with many taking the time and trouble to cooperate with the researchers.  Among these were Dr A L Rouse, Dr Rosemary Horrox, Dr C A J Armstrong (Mancini’s editor), although Professor Ross was unwell at the time so he was asked to prepare a statement.   However one of Ross’ former students,  Dr Tony Pollard, author of The Tyranny of Richard III stepped up to the plate and was one of the first recruits to the team of witnesses for the prosecution team. Dr David Starkey followed – oh the joy! – as did historian .Jeffrey Richards. 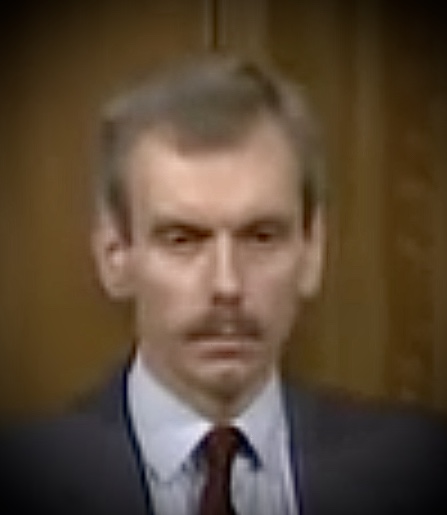 The witnesses for the prosecution.

However in a perfect balance the defence had that redoubtable, stalwart of Ricardians, Jeremy Potter, Chairman of the Richard III Society and  author of Good King Richard? Authors spoken to included Dr Arthur Kincaid, Audrey Williamson and Elizabeth Jenkins.  Many experts were consulted including Professor Charles Wood, Dorothy Mitchell,  the Rev Barrie Williams, Isolde Wigram and Carolyn Hammond.  Keith Dockray agreed to speak in Richard’s defence although ‘on balance he felt the weight of historical evidence pointed towards Richard guilt‘.   He emphasised that Richard after 10 years in the north was regarded with extreme hostility by southerners such as the Croyland Chronicler and the nobility of the south who were ‘inspired by fear of an invasion of northerners and not through a deep concern for the welfare of the princes’.  Mr Dillon decided the night prior to the trial not to call Mr Dockray explaining that  although he had much useful information in the event of the prosecution asking him directly did he believe Richard had murdered the princes, he could not be expected to lie which could have proved a tad awkward.  This was greeted with good grace by Mr Dockray but happily at the end of the day all was not lost as much of the information he had supplied would go on to be used by the defence in their cross examining.  Anne Sutton editor of the Ricardian and co-editor of the Coronation of Richard III the Extant Documents was thought the best suited to handle the technical questions regarding the  precontract and although at first reluctant finally rallied to the cause which must have been a massive relief – well for the defence that is.   Art historian Dr Pamela Tudor Craig,  later Lady Wedgewood,  was asked to tackle the question of Richard’s image over the centuries. Peter Hammond, co-editor of the Coronation of Richard III the Extant Documents and The Children of Richard III was asked to join the defence team because of his ‘encyclopaedic knowledge’ of the subject.

The Setting.  A replica of Court Four at the Old Bailey was built in a studio  at London Weekend’s Southbank Television Centre which had the added advantage of making the lawyers feel at home.

The Jury.  Twelve  members of the public without any specialist interest in or knowledge of mediaeval history were required. However it was realised that a jury member who might become bored because of  a lack of interest in history  might possibly lose  interest and thus ‘fail to absorb information’.  Also it was realised   an attempt to minimise any ‘geographical bias’ would be needed as it was feared that a wholly London based jury might be unsympathetic to an alleged murderer from the north of Trent.  Love it!  A balance was also needed between young and old,  social classes as well as the sexes as it was pointed out that Richard III had a particular appeal for women.  Therefore a questionnaire was devised by London Weekend’s market research department which was hoped would weed out those wholly  unsuitable and a telephone research company made calls to all parts of the country and a short list was made of around 30 potential jurors.  This list was whittled down by such reasoning as a solicitor with his professionalism might dominate the jury room, no more than one teacher should be allowed and, wait for it, a travel agent was rejected because he was very well informed about the Tudors and it was thought this might prejudice him against a Plantagenet.

The final members of the jury was selected :

2. An estate agent from South London.

3. A farmer from Nottinghamshire

4. A bookseller from Stroud Gloucestershire

5. A builder from Sussex

6. A company director from Sheffield

7. A student from Leicester

8. A Health Survey administrator from Bristol

9. A housewife from Nottinghamshire

10. A teacher from Lancashire

11.  A typist from Gloucester,  and finally

12. A housewife from Lancashire

All the jury were in the dark as to what the trial was about only that it had historical interest although one of their number  was let in on the secret by one of ‘those founts of uncanny though not necessarily reliable information –  a London taxi driver’….

The twelve members of the jury…

Finally the trial began at 2:30 pm and  seven and a half hours later the jury had reached its verdict.  The resulting 4 hour programme was shown on Channel Four on Sunday 4 November 1984.

The Clerk to the Court : The court will rise. The charges are that King Richard III  did in or about the month of August 1483, in the Tower of London, murder Prince Edward, Prince of Wales, and Prince Richard, Duke of York.

The judge addressed Mr Dillon – “I understand that you represent King Richard III  in these proceedings?“.   Mr Dillon replied ‘My Lord I do’.  The judge  replied ‘In view of his inescapable absence what is your plea on his behalf?’.   Mr Dillon responded ‘My Lord, the plea is one of not guilty‘.  And thus the trial of King Richard commenced and,  if a  long dead king was  unable to defend himself ,  there were others who would be more than willing to  take up the cudgel on his behalf.