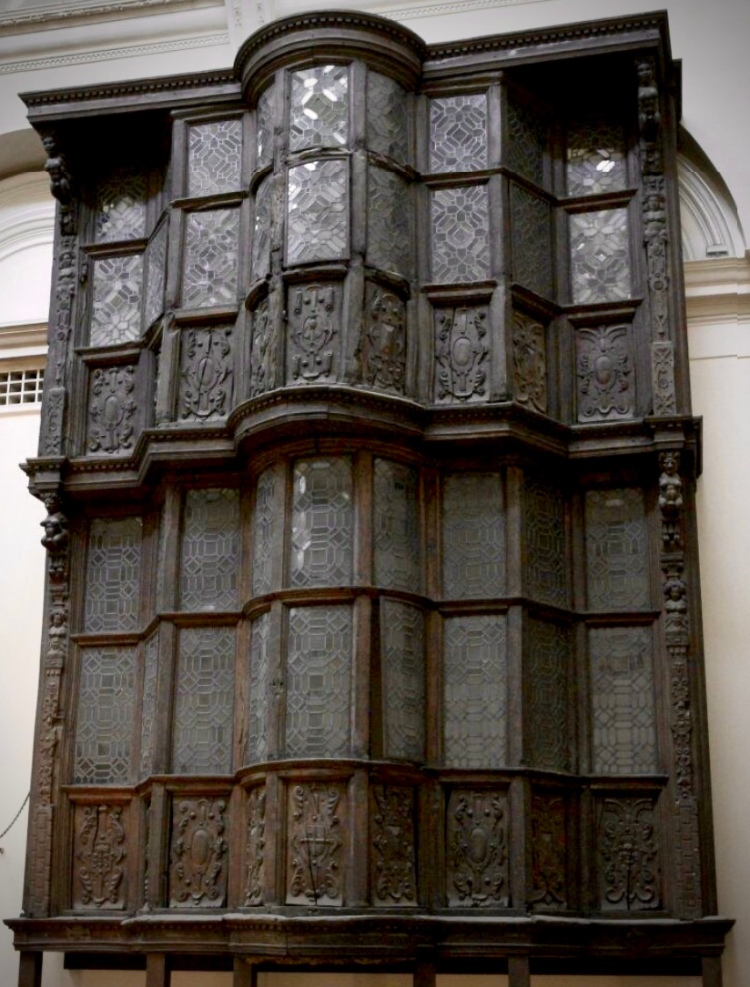 Sir Paul Pindar acquired the site in what was then known as  Bishopsgate Street Without in 1597 and begun building the house, later known as Pindar’s House,  shortly afterward at the corner of Half Moon Street then known as Half Moon Alley (1).     Bishopsgate standing just outside the city walls meant the house managed  to survive the Great Fire of London as well as a further disastrous fire in 1765 when many of the other fine timber buildings were destroyed.     After Sir Paul’s death the house morphed into a tavern called ‘Pindar’s Head’.   Sadly it was unable to  survive awful neglect nor the march of progress I’m afraid to say.  In 1890 it was demolished to make room for an enlargement of Liverpool Street Station.    Over the centuries prior to the demolition the ground floor had been much altered but the upper two stories of  the façade remained much in their original state and it was this wonderful frontage which  was presented to the Victoria and Albert Museum, London where it remains today.  From this small surviver of what had once been a grand mansion we able to to catch a glimpse of how splendid the old  buildings of the well to do were in Old London.  On the first floor behind the projecting window lay a large reception  room with fine moulded plaster ceilings, an elaborate chimneypiece and oak panelling. 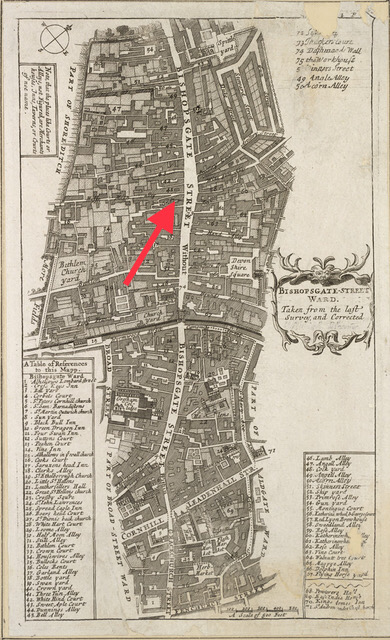 Stype’s map of Bishopsgate in 1720.  Sir Paul Pindar’s house is arrowed and stands on the corner of  Half Moon Street known as Half Moon Alley in Sir Paul’s time. 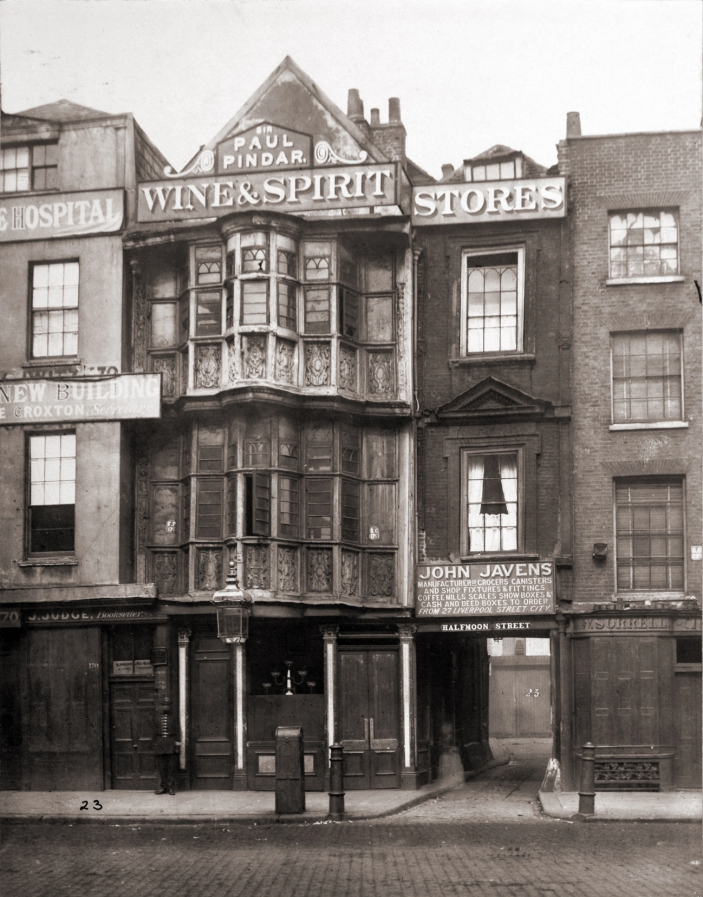 Photo c.1890 showing the house when it was a tavern known as the Sir Paul Pindar. The entrance to Half Moon Street formerly Half Moon Allen can be seen to the right.

First floor exterior.  Photo Victoria and Albert Collections. Still with glass although this has sadly been removed as it was not contemporaneous with the rest of the façade  Personally I think this was a bad move as with the glass, which was still very old, there was a much better impression of how the house looked in its heyday.  Still I am not an expert. 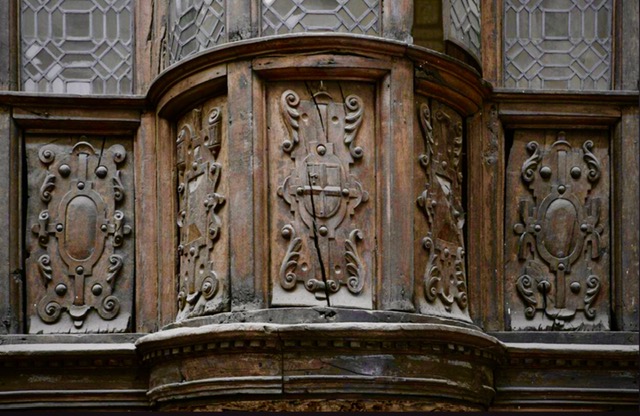 Close up of first floor façade.

Sir Paul Pindar c.1565–1650 was a successful and very wealthy merchant and diplomat  who would go on to be Ambassador to Constantinople – now Istanbul.  Born in Wellingborough, Northamptonshire, he was the second son of Thomas Pindar of that town and it was the initial intention that he would go to university.  However the young Pindar chose to go down the mercantile route and he became  apprenticed aged 16  to Mr Parvish an Italian merchant.   Paul, who must have made a good impression of himself on his master,  would find himself sent to Venice as his master’s representative where he stayed for the next 15 years.  While there he used his time wisely, prospering and gaining useful knowledge of Italian banking systems.  Robert Ashton, Sir Paul Pindar’s biographer tells us:  ‘this bore fruit in the later years of James I’s reign in Pindar’s interesting, though disregarded, proposal for the establishment of an English national bank which would benefit the crown by furnishing ‘exacte knowledge of the trewe estate of everye perticular man, by meanes wherof dewties might be Imposed proportionable to the effectuall valliditie of mens trewe Estates’ While this consideration alone might account for the failure of such proposals to attract the English mercantile community—at least before 1694—even more significant was Pindar’s suggestion that deposits in the bank would provide a potential source of loanable funds ‘uppon which his Majestie may prevayell at pleazure eyther by Consente or withoute the privitie of the Propryetaryes at all tymes’ (2).

During his stint as English Ambassador,  which begun about 1611,  he was knighted while on a visit to England in 1620 by James Ist.  He was by this time wealthy enough to have ‘purchased a diamond from Turkey valued at £30,000 which he sold on to James Ist on credit to wear at divers times on days of great solemnity’.   The diamond was next sold to Charles Ist by whom  it was transmitted into funds for securing the safety of  Queen Henrietta Maria and her children during the Civil War (3).   Sir Paul  would finally return to live permanently in England in 1623 after which he would invest much of his wealth into the management of custom farms.   His wealth allowed him to make generous financial gifts including £10,000 towards the rebuilding of St Paul’s Cathedral.  He has been described as an ardent royalist making  massive personal loans to both James Ist and Charles Ist, particularly to the latter in 1638–9 ‘when he advanced in all about £93,000, £8000 of which was for a large pendant diamond for the king in May 1638. ‘This Sir Paul,  observed Sir Edmund Rossingham, ‘never fails the King when he has most need‘.    However Charles’ downfall and execution in 1649 meant that his debts to Sir Paul were never repaid.  This would sadly leave Sir Paul, at the very end of his long life,  with massive debts when he died aged 85 on the 22 August 1650.  He would be buried  on 3 September in his parish church,  St Botolph without Bishopsgate, to which  he had been a generous benefactor.   This church was demolished in 1729 but we do know  his epitaph read he was ‘faithful in negotiation, foreign and domestick, eminent for piety charity, loyalty and prudence’.   He had never married and in his will dated 24 June 1646 he left one-third of his estate to the children of his nephew who had predeceased him, and another third to his executor and kinsman, William Toomes. Tragically in 1655 William Toomes  ‘took his own life after failing to satisfy Pindar’s debts and legacies since, of the £236,000 at which Pindar’s estate had been valued in 1639, desperate debts now preponderated.  Also largely irrecoverable was the final third of the estate, consisting of miscellaneous legacies to friends and relatives (4).

Although the final months  of Sir Paul likely were troubled with money worries as the reality of not being able to pay his debts kicked in,  I would like to think that he was still in his fine house, looked after and supported by loyal friends.  For he was a kind man and perhaps his only fault was to be too trusting and loyal to people who were not worthy of neither..

RICHARD WHITTINGTON c.1350-1423. MERCER, MAYOR AND A MOST BENEVOLENT CITIZEN OF LONDON

THE ORANGE AND LEMON CHURCHES OF OLD LONDON

THE ANCIENT GATES OF OLD LONDON