COWGATE NORWICH, DAVID HODGSON c.1860.  WHITEFRIARS STOOD ON THE EASTERN SIDE BETWEEN THE CHURCH OF ST JAMES POCKTHORPE (SEEN ABOVE) AND THE RIVER A SHORT DISTANCE AWAY..NORWICH MUSEUM

On 30 June 1468, died  Eleanor Butler nee Talbot.   Eleanor came from an illustrious family.  Her father was the great John Talbot, Earl of Shrewsbury, her mother, Margaret Beauchamp’s father was Richard Beauchamp, Earl of Warwick.  Richard Neville Earl of Warwick known as ‘The Kingmaker’ was her uncle by marriage.   Eleanor’s sister, Elizabeth, was to become the Duchess of Norfolk and was the mother of Anne Mowbray, child bride to Richard of Shrewsbury.  Eleanor was a childless widow, her husband, Sir Thomas Butler, heir to Ralph Butler, Lord Sudeley, having died around 1459 and possibly of injuries sustained at the battle of Blore Heath (1)

It would seem that the young widow caught the eye of the even younger warrior king Edward IV, who fresh from his leading the Yorkists to victory  at Towton and the overthrow of Henry VI,  found himself swiftly propelled onto the throne of England.  No doubt he was giddy with success because quite soon after, having met the young Eleanor, he married her in secret, an amazingly stupid action, and one which would come back to haunt him, and his bigamous “wife” Elizabeth Wydeville with all the subsequent and tragic  repercussions for his family.  The relationship was doomed to be one of short duration,  the reasons for this being lost in time.  Much has been written on this subject and I would like to focus here on the Carmelite Friary known as Whitefriars, Norwich, where Eleanor was later to be buried.

Whitefriars had been founded in 1256 by Philip de Cowgate, son of Warin, a Norwich merchant who settled lands there upon William de Calthorpe ‘upon condition that the brethren of Mount Carmel should enter and dwell there without any molestation for ever and serve God therein’.  Sadly much later Henry Vlll was to have other ideas.  However returning to  Philip de Cowgate- his wife having died and growing old ‘took upon him the the Carmelite habit and entered the house of his own foundation’ dying there in 1283.  The building of Whitefriars was not completed until 1382 and so begun its long journey through history.  The notable persons being buried there are too numerous to mention as are the many benefactors but the various highs and lows make interesting reading.  Notable incidents include:

1272, 29 June ‘On the feast of St Peter and Paul in the early morning when the monks rise to say the first psalms, there was an earthquake’.

Further problems for the friary occurred later on that year –

1272, 11 August   ‘….the citizens of the city attacked the monastery and burnt a large part of the building’

1452 A group of people begun to cause disturbances in the neighbourhood.  ‘Item xl of the same felechep came rydyng to Norwiche jakked and salettyd with bowys and arwys, byllys, gleves , un Maundy Thursday, and that day aftyr none when service was doo, they, in like wise arrayid, wold have brake up the Whyte Freris dores, where seying that they came to here evensong, howbeit, they made  her avant in town they shuld have sum men owt of town’.  However ’the Mayer and alderman with gret multitude of peple assembled and thereupon the seyd felischep departid’.

1485 – King Richard III confirmed all the houses, lands and privileges of the Carmelites

1488/9 – ‘In the langable rental of the fourth of Henry the seventh, these friars are charged two-pence half-penny for divers tenements which they had purchased’.

1538, 2l Sept – The duke of Norfolk wrote to Thomas Cromwell ‘intended yesterday to have ridden to Norwich to take surrender of the Grey Friars, but was ill and so sent his son of Surrey and others of his council who have taken the surrender and left the Dukes servants in charge.  Thinks the other two friars should be enjoined to make no more waste.  The Black Friars have sold their greatest bell’.

1538 7 Oct  Letter from the Duke of Norfolk to Thomas Cromwell – ‘The White and Black Friars of Norwich presented a bill, enclosed, for Norfolk to take the surrender of their houses, saying the alms of the country was so little they could no longer live.   Promised ‘by this day sevennight’ to let them know the kings pleasure: begs to know what to do and what to give them.  They are very poor wretches and he gave the worst of the Grey Friars 20s for a raiment, it was a pity these should have less’(2)

The Friary was finally dissolved in 1542 and its lease granted to Richard Andrews and Leonard Chamberlain.  Shortly after which the land was then divided into many different ownerships.  The rest is history….

But back to the present – in 1904 foundations were discovered and in 1920 six pieces of window tracery were found and built into a wall at Factory Yard, these were to be cleared away when Jarrolds, the printers,  extended their works.  Thank to the intrepid George Plunkett who took photographs of old Norwich between 1930-  2006 we can see this tracery before it disappeared forever.

Mr Plunkett also took photos of the now famous Gothic arch as it was in 1961 after it had recently been opened out.  Sadly he reported that ‘a dilapidated flint wall adjoining the bridge was taken down as not worth preserving – a modern tablet identified it as having once belonged to the anchorage attached to the friary’ (3). 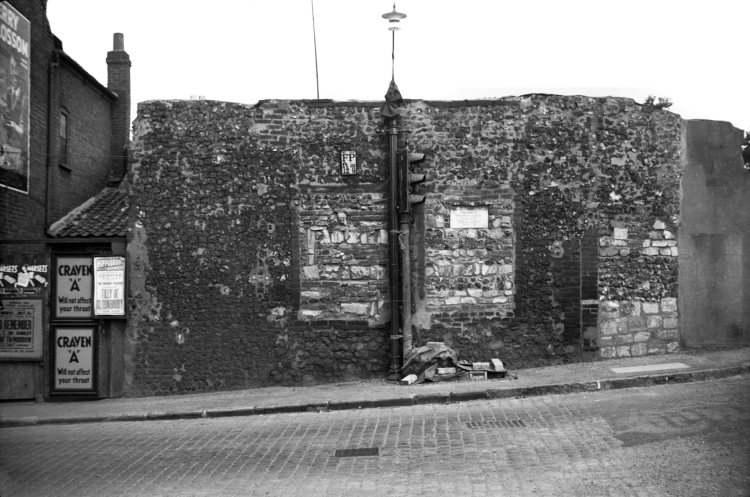 The flint wall before demolition – photograph by George Plunkett c1939 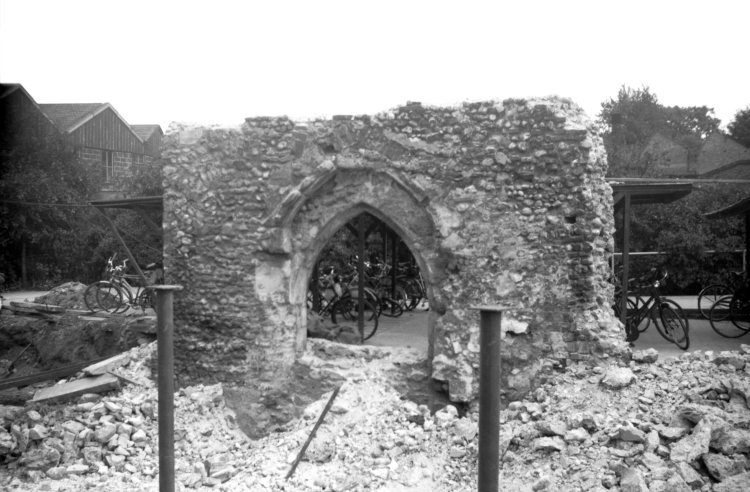 Whitefriars Cowgate friary doorway west side uncovered in 1961 it stood adjacent to the anchorage.  Photograph by George Plunkett

Up to date views of the friary doorway.  With many thanks to Dave Barlow for permission to use his beautiful photos…. 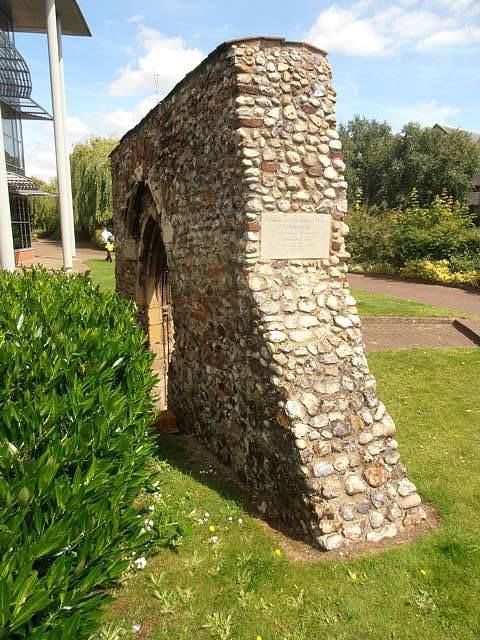 An important Whitefriars relic, no longer  in its original position, survived and went on  to become  known as the Arminghall Arch.  This 14c arch has experienced a number of moves since it was taken down in the Dissolution.  It was first of all erected at Arminghall Old Hall. There it remained until the Hall was also demolished.  It was acquired by Russell Colman who transferred it to his grounds at Crown Point.  From there it has now finally been installed at Norwich Magistrates Court, just across the bridge from its original position. 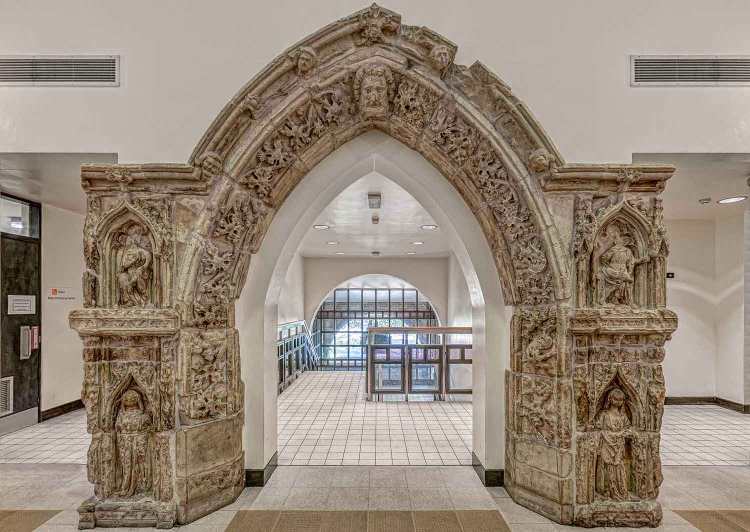