Reconstruction of a Medieval Painting from St Stephens Chapel. Possibly Queen Philippa with her daughter.  Ernest William Tristram c.1927.   Worked from original drawings made by the antiquarian Richard Smirke 1800-1811 before the fire of 1834. Society of Antiquities.   Parliamentary Art Collection

St Stephen’s was the medieval royal chapel of the Kings and Queens of England and part of the old Palace of Westminster.  What a jewel in England’s crown and what a loss.  Destroyed by a fire in 1834 that also destroyed what was left of the old palace, which had already lost its royal apartments in a fire in the 1530s.  King Stephen is said to have built the original chapel, first mentioned in the reign of King John 1199-1216, with Edward lst beginning a major refurbishment in 1292.  The architect was Michael of Canterbury who also designed the beautiful Eleanor Crosses.   On two levels the rebuild took over 70 years to complete which seems to have been because of the ebb and flow of the finances of the first three Edwards.     The top level was for the use of the Royal Family and a door south of the altar  lead to the royal apartments.  It must have been a sight to behold…with it ceiling painted in azure and  thousands of stars of gold.  The lower chapel,  darker because it was slightly below ground level,   was known as St Mary Undercroft,  and after being used for numerous purposes over the centuries , including some say Cromwell stabling his horses there,  has  managed to survive to this very day and  back to its original use, that of a chapel.

Kings and queens who happened to die while residing in Westminster Palace were taken to the chapel to lie in repose.  Among those to lie there before their burial, usually in the Abbey, was the ‘seemly, amiable and beauteous’ Queen Anne Neville, daughter of Warwick the Kingmaker and consort to King Richard III (1).  On a happier note St Stephen’s may also have been where their wedding took place.  Several royal weddings did take place there for certain including that of Richard II and Anne of Bohemia and also Edward IV’s youngest son Richard of Shrewsbury and Anne Mowbray.   Anne was only 4 years old at the time, the groom being even younger at 3, and Richard Duke of Gloucester led Anne by the hand into the chapel.

The chapel was dissolved at the Reformation in the time of Edward VI and thereafter it became the first permanent home of the House of Commons.  Certain abuses of the Chapel begun from then on including the removal of the beautiful soaring upper celestery by Wren.  The final fire took hold at around 6 pm. on the evening of 16th October 1834.  The final destruction by  fire  begun with  the burning of two cartloads of wooden tally ‘Exchequer’ sticks which caused  a furnace  to overheat. 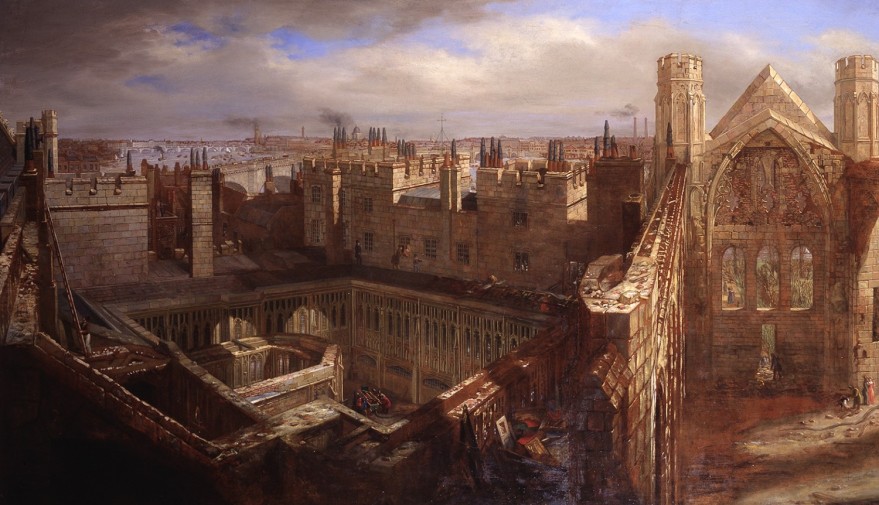 Upon Westminster Hall.  George Scharf.   The intrepid Mr Scharf made this painting over four days after climbing on to Westminster Hall’s roof for a better view of the destruction of the chapel and palace..

Warnings of the danger of fire had been ignored by a ‘senile housekeeper and a careless Clerk to the Works’  leading to the Prime Minister to declare the disaster was one of the ‘greatest instances of stupidity on record’.  During the course of the conflagration medieval paintings and decorations that had been hidden over the centuries were once again revealed and gawping crowds flocked to see them.

Wooden tally or Exchequer sticks. The burning of two cartloads of these caused a chimney to overheat which led to the destruction of Westminster Palace including St Stephen’s hall.

We are very fortunate that 30 years prior to the disaster life sized copies were made of the most important medieval paintings,  which would have been to the east of the chapel where the alter was,   while the chapel was being renovated by an antiquarian Richard Smirke.  The art historian and conservator, Ernest William Tristram (1881-1952) meticulously reconstructed Smirke’s drawing in a collection of 20 paintings.  The British Museum now holds fragments from the paintings and decorations salvaged from the fire and from them can be gleaned an impression of the quality and beauty of the lost works.

The new building, now called St Stephen’s Hall, was rebuilt in Neo Gothic style on the footprint of the old Chapel carefully adhering to the same measurements, 95ft long and 30 ft wide.  Brass studs now mark where the Speaker’s Chair which in turn  would have marked the place where the high  alter once stood. 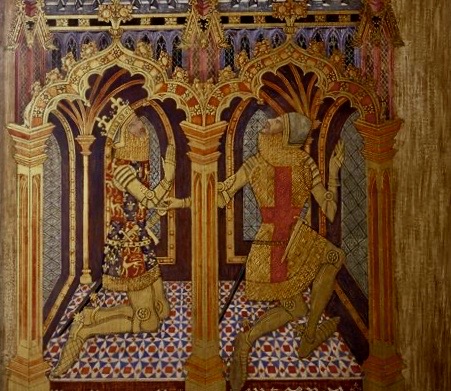 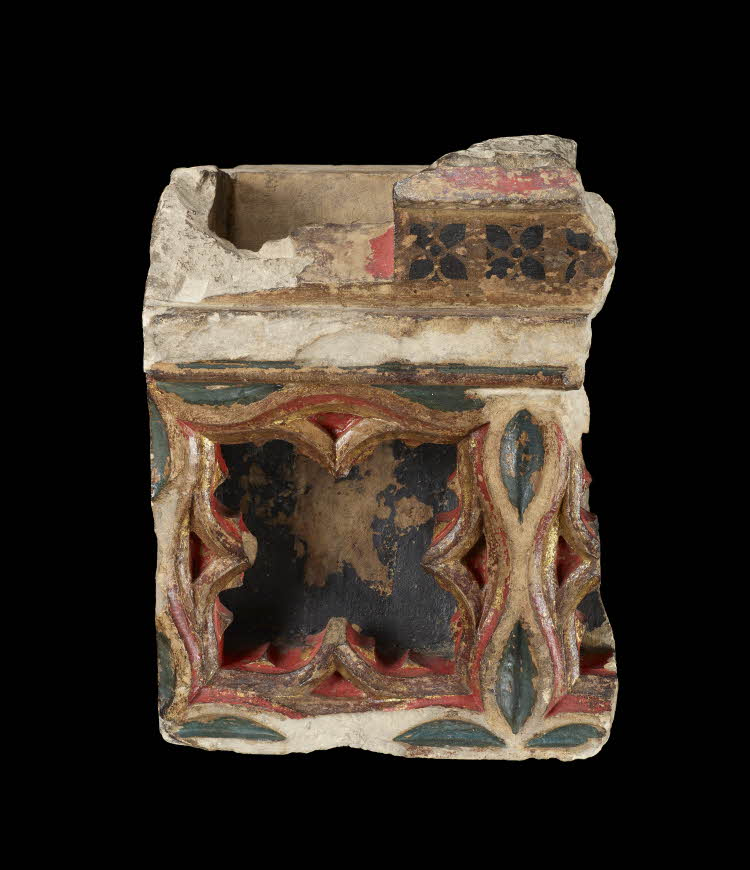 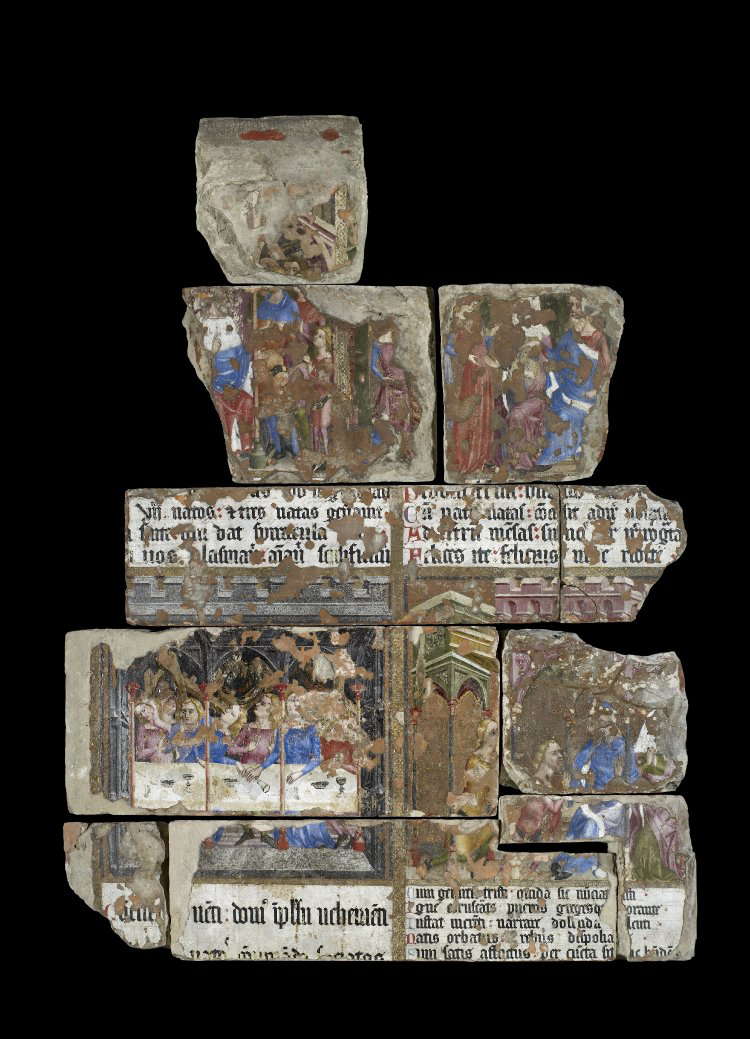 Some of the 17 fragments of wall paintings salvaged from the fire and now in the British Museum.  All came from the east end of the north wall.

The smaller chapel on the lower level.  Known as St Mary Undercroft.  Survived the fire and is once again in use as a chapel. Watercolour by George Belton Moore.

Another watercolour by George Belton Moore picturing a demolition of a doorway next to St Stephens.  Ive been unable to ascertain where this doorway was situated.

The Ruined St Stephen’s from the East prior to demolition.   Parliamentary Art Collection.

I am indebted to Sir Roy Strong’s book Lost Treasures of Britain for some of the above information.