Possible portrait of Elizabeth Talbot, Viscountess Lisle c1468 Petrus Christus of Bruge Gemäldegalerie, Berlin.  Note the gleam of the pearls, the pattern of the brocade gown and the little gold pin used for pinning the fine lawn partlet onto the bodice.  How delicious!

Could this charming portrait  be of Elizabeth Talbot, Viscountess Lisle –  Lady Eleanor Butler/Boteler nee Talbot’s niece –  as  suggested by the late historian John Ashdown-Hill?  Elizabeth was born about 1451 and would have been around 16 when she sat for this portrait if this is indeed her.  John,  a historian who delved deep,  based his suggestion upon the  fact that there was once an inscription on the now lost original frame identifying the sitter as a member of the Talbot family.  This is also been confirmed by a letter dated 1824 written by Gustav Waagen,  Director of the Berlin Museums who gave his interpretation of a lost Latin inscription identifying  the sitter as “a niece of the famous Talbots” (eine Nichte des berühmten Talbots).   It is known that Elizabeth Mowbray, nee Talbot, Duchess of Norfolk,  took some of the Talbot family children with her when she travelled to Flanders for the marriage of Margaret of York to Charles the Bold in 1468. 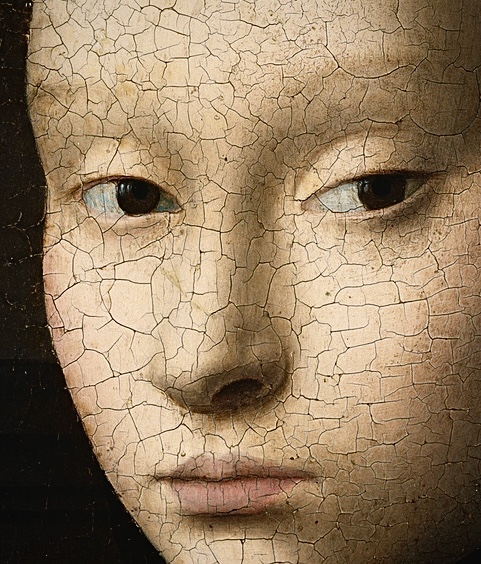 Close up of the effigy.  Photo Kate Keens 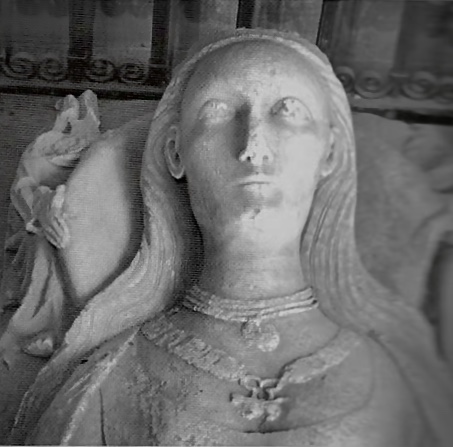 There are clearly similarities between the portrait and effigy.   Effigy photo from John Ashdown-Hill’s book Eleanor the Secret Queen.

It’s interesting to compare the portrait with Elizabeth’s monument in St Mary’s Church, Astley,  where she was buried with her husband Edward Grey who was created Viscount Lisle by Richard III in 1483.  This is where it gets interesting because Edward Grey was the brother of Sir John Grey,  first husband of Elizabeth Wydeville,  bigamous wife to Edward IV.   As our Elizabeth was the niece of Lady Eleanor Butler (Elizabeth Wydeville’s very own personal nemesis) who was true wife of Edward IV, things get very intertwiney.  Elizabeth  would have still been a child when Sir John Grey met his death for Lancaster at St Albans 1461  and it’s highly unlikely she met him.  However  her other aunt Elizabeth Talbot, Mowbray Duchess of Norfolk, would surely have recalled the time when Elizabeth Wydeville had been Lady Grey but she unfortunately left no indications of her thoughts on the bigamous Wydeville marriage and its disastrous results although she must have had them aplenty.

Elizabeth Talbot Duchess of Norfolk.  Described as ‘a very beautiful English lady’  by a bystander who saw her in Flanders.  Edward IV treated her appallingly in her widowhood. Stained glassed window Long Melford church (1)

Elizabeth, dying in 1487,  predeceased her husband who died in 1492 who requested in his will to be buried next to her in St Mary’s  Church,  Astley :  My body to be buried in the new tomb in the new chapel of our Lady, by me began,  in the College of Astley where the body of Elizabeth lieth (2).    His monument has been destroyed while Elizabeth’s has been moved and now lies inexplicably betwixt the monuments of Cecilia Bonville, Marchioness  of Dorset and Edward Grey, Lord Ferrers of Groby d.1457, father to John and Edward Grey (3) 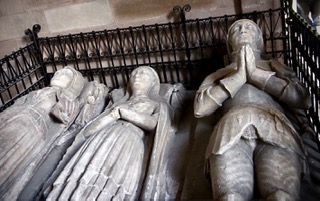 Viscount Lisle was treated well by Richard after the failure of the Wydvilles to gain control of the young Edward V.   Bore the Rod with the Dove Richard’s Coronation.   May have withdrawn from Richard prior to Bosworth.  He was well received by Henry Tudor (4).