An intriguing doorway leads into the Great Chamber where the family would have entertained important guests.  A fine 15th century fireplace has survived as well as a 16th century window.  Photo from the English Heritage Guidebook book

Following on from my earlier post THE RISE AND FALL OF WILLIAM LORD HASTINGS AND HIS CASTLE OF KIRBY MUXLOE , Lord Hastings also rebuilt and fortified his other residence in the Midlands, Ashby de la Zouch which had come into his possession in 1462.    Both castles were in the process of being remodelled and extended,  to befit his newly attained status,  from existing manor houses when disaster and tragedy overtook him in 1483.    Work was stopped quite soon at Kirby Muxloe but continued at Ashby de la Zouch where the rebuilding work was more more advanced with two towers and a new chapel already in use.  One of these towers contained a kitchen that was large even by the standards of medieval castle kitchens.  The other tower contained a complete set of domestic apartments. 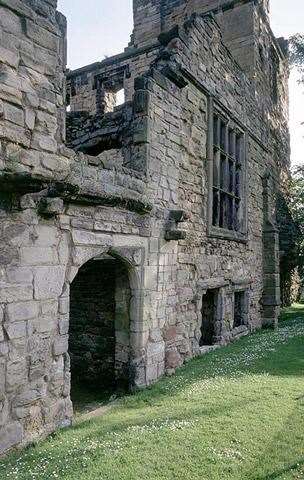 A doorway into the castle.  Photo English Heritage.

Buck’s c.1730 engraving of the castle.  The doorway shown in the photo above can clearly be seen as well as the chapel still retained its traceried windows.  ‘Hastings Tower’ can be seen in the background.  National Galleries.

The spacious and elegant chapel was built by Lord Hastings and would have been served by the priests and singers from his household when he was in residence.  There were stalls to the side of the chapel for people to sit while the high altar was at the far end on a dais.   There was two balconies, one above the other at the eastern end with  closets  where the Hastings family could observe the services in private.   The first floor closet was connected to the great chamber by a door which is now bricked up (1).

The windows of the chapel today minus their wonderful tracery..

The pièce de résistance of the castle was the Great Tower also known as Hastings Tower which stood in silent testimony to the power and wealth of Lord Hastings.  Crowned with a projecting parapet of battlements and elegant turrets at the corners,  with the windows growing in grandeur the higher the floors rose,  it must have been a sight to behold.

A surprisingly small door at the entrance to the Great Tower.   A projecting panel carved with Lord Hastings arms can be seen higher up. 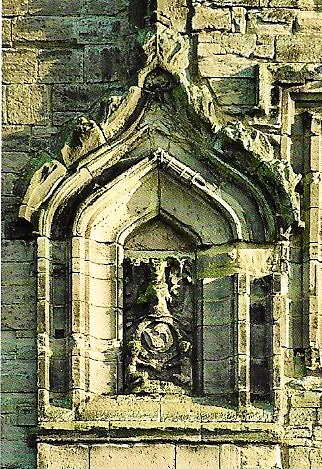 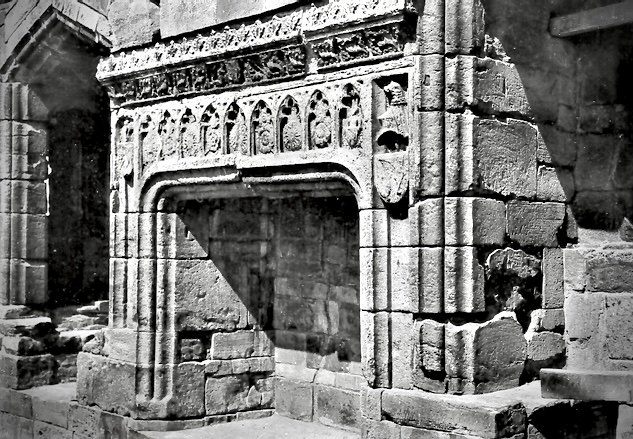 Fireplace in in the Great Chamber of Hastings Tower decorated with Edward IV’s heraldic sunbursts.  From an old postcard.

Cutaway of the Great Tower c.1480.  The fireplace from the postcard above can be seen on the top floor. Ashby de la Zouch Castle English Heritage Guidebook.

Besides the kitchen in the Great Tower a new kitchen was built in what is known as the Kitchen Tower.  This kitchen has to get a mention.  It was basically the mother of all medieval kitchens.  The high vault was decorated with carved bosses of stone, a rare ornament in a kitchen.  This massive vaulted space was ringed with hearths.  Each of the hearths incorporated several cooking spaces, such as a cauldron stand for boiling, fireplaces for roasting and ovens for baking’ and ‘each cauldron stand was lit by a little window.’ (2).

One of the surviving hearths with a cauldron stand to the left and an oven to the right.  Above the cauldron stand and out of sight is a small window.

But to return to Lord Hastings.  All of Hastings’ power stemmed and depended upon his close friendship with Edward IV.   In 1472 a Paston servant commented: ‘what my seyd lord Chamberleyn may do wyth the Kyng and wyth all the lordys of Inglond I trowe it be not unknowyn to yow, most of eny on man alyve‘   From around 1461 numerous powers, rewards and money were showered upon him as manna from heaven.  Always a Yorkist, his father Leonard had been a retainer of Richard Duke of York, Hastings was knighted after Towton on the 29th March 1461.  From that point on his rise was ‘rapid’ and later on that year he was appointed Chamberlain of the Royal Household,  had received a personal summons to Edward’s first parliament as Lord Hastings of Hastings and made Lieutenant of Calais.  Grants of  land had to be given to support his new status.  This was when Ashby de la Zouch among other lands was given to him and the great plan took hold to rebuild and remodel the old manor house into a residence that would be more befitting for someone of the new owner’s status.   Money was being spent like rice, as they say, and good fortune smiled on him when in 1471 Charles Duke of Burgundy rewarded him an annuity of 1000 écues and in 1475 Louis XI a pension of 2000 crowns.  Rosemary Horrox wrote of Hastings “Unusually for a royal favourite Hastings seems to have been not only successful but well liked too.   There seems no reason to quarrel with the later verdict of Thomas More  – ‘an honourable man, a good knight and a gentle loving man and passing well beloved’.   He was not criticised by the rebels in 1469-70 or by Richard III in 1484 when he was distancing himself from his brother’s regime’ (3).

Although all went swimmingly well with Lord Hastings and his very best friend Edward living the life,  this may well have led to feelings of animosity from Elizabeth Wydeville,  understandably,  and possibly jealousy from her son, Thomas Marquess of Dorset who was married to Hastings’ step daughter,  the great heiress Cicely Bonville.  Indeed Mancini wrote that Hastings ‘loathed the entire family of the queen on account of the Marquess’ (4). There is a story that after Edward’s death, his favourite mistress, Jane/Elizabeth Shore was shared between Hastings and Dorset, although whether this was done willingly or is even true is another matter.

After Edward’s premature death  had taken everyone by surprise, Hastings acted with both alacrity and integrity putting his foot down with the Wydevilles and their machinations,  and arguing for the appointment of Richard Duke of Gloucester as Protector.  This did not sit well with those who had been involved in some part in the judicial murder of George Duke of Clarence and who were fearful of their futures should Gloucester seek justice for his brother.   According to Mancini Hastings wrote to Gloucester urging to come to London in all haste ‘with a strong force’ adding he should  also take the young Edward V into his care.  When this is what indeed transpired the Crowland Chronicler described him as ‘bursting with joy over this new world‘.  This may have been a bit of exaggeration but still, you can get the drift.  However, in actions that have never been fully explained or proven, Lord Hastings’ world imploded when things came to a head, no pun intended, in the council chamber at the Tower of London on the 13th June 1483.   Hastings was accused of plotting to assassinate Richard and he was without further ado ‘byhedyd forthwith’ although there is some debate about the actual timing (5).  It can only be imagined the thoughts that raced through Hastings’ head as walked to his execution.  Others were also arrested including the Archbishop of York, the Bishop of Ely, Oliver King and  Lord Stanley who sustained a wound to his bonce which unfortunately was not terminal.   There was talk that these people and others had been meeting secretly.  What had occurred that caused Hastings to turn his coat?  One of the most plausible theories put forward has been that he although he could not contemplate the Wydevilles being in control of the young Edward V and the repercussions this would hold for him, he could neither contemplate him being excluded from the throne either.   Another suggestion is that he had tied his colours to Gloucester’s flag pole but when the expected rewards were not forthcoming, indeed they were all being heaped upon the Duke of Buckingham, he did a complete volte-face.  Perhaps it was a combination of reasons as is often the case or something else entirely different and now lost in the mist of time.   After his death Gloucester, now Richard III, behaved magnanimously to the widowed Katherine Hastings, who was allowed to retain most of her husband’s estates and custody of his heir.  His wish made in his will to be buried near Edward IV was granted and today his beautiful chantry chapel stands a testament to a man, although with his flaws, was also well thought of.   Richard,  no doubt between a rock and a hard place,  had little time to think at a dangerous and fraught time in his life.  But it’s sad to say, if Hastings had held firm in his allegiance to Richard,  things may very well have had a different outcome at Bosworth.

Lord Hasting’s widow, Katherine,  sister to Richard Neville, ‘Warwick the Kingmaker’ lived on at Ashby de la Zouch until her death in c. 1503    In her will she mentions and bequeaths tapestries and hangings that were hanging in the chapel and tower at that time which  give an idea of the opulence that was Ashby de la Zouch in its heyday –  ‘Item, an old hanging of counterfeit arres of Knollys, which now hangeth in the hall; and all such hangyngs of old bawdekyn or lynen paynted as now hang in the chappell with the altar-clothes and oon super altare (cloth) with oon of the vestiments that now be occupyed in the chappell’.  Also ‘Item I woll that my Masse (book) covered with red velvet that is occupied in the chappell, be given to a poor church….’ (6)

She requested in her will to be buried in the lady chapel of St Helen’s, Ashby de la Zouch’s parish church ‘ between the image of our lady and the place assigned for the vicars grave’. Although the site of the original lady chapel was lost at the Reformation and the site of Katherine’s burial place forgotten, there are two vaults, one under the chancel and one below the Huntingdon Chapel that contain old coffins and hopefully one of these is that of Katherine Hastings (7).

The castle continued to be held by the Hastings family until its partial destruction in 1648. A later generation of the Hastings family would return to live at Ashby de la Zouch for a while in a house constructed in 1820.  Today a school now stands where this house once stood.

THE MYSTERIOUS DEATH OF EDWARD IV

JUST WHY DID BUCKINGHAM THINK HE COULD CROSS THE FLOODED SEVERN?

THE SIX SISTERS OF WARWICK THE KINGMAKER