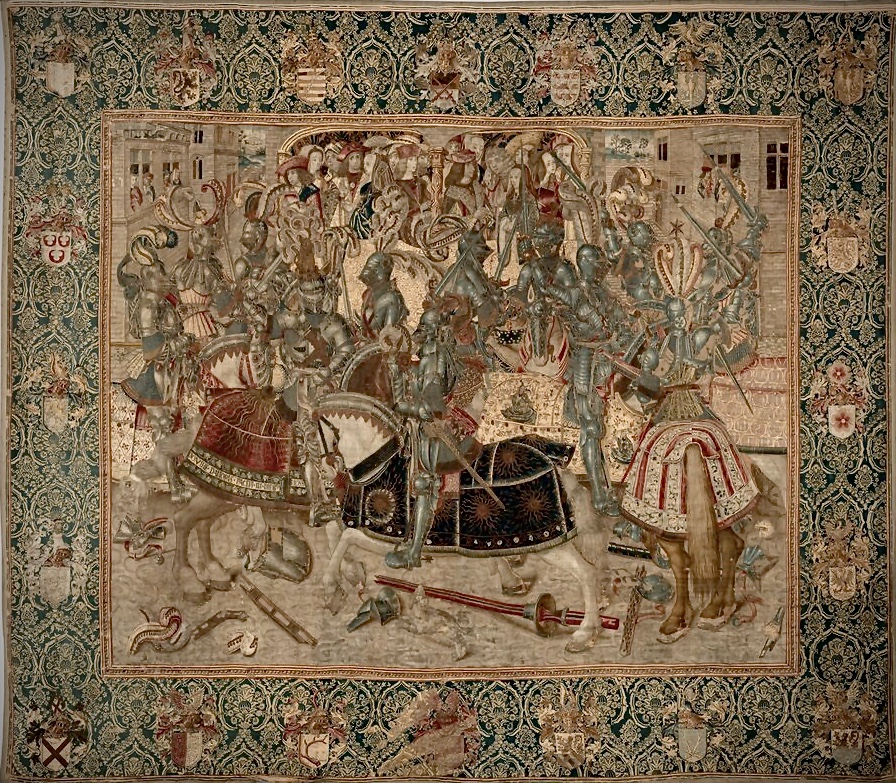 My attention was first drawn to this sumptuous tapestry by an article written by Nathalie Nijman‐Bliekendaal in the Ricardian Bulletin, the magazine of the Richard III Society in 2019.  Not only is it breathtakingly beautiful but also of great interest to those interested in 15th century English History because it may depict the portraits of two people who strongly featured in the those turbulent times.  They are Margaret Plantagenet, Duchess of Burgundy, sister to Edward IV and Richard III and possibly her nephew,  Richard of Shrewsbury, Duke of York then known as Perkin Warbeck.  I say ‘may’ but I am 100% certain it is these two people.  I’ll return to this later.  Described ‘the most spectacular representation of a tournament of that time’ it depicts a mock combat of knights before an audience in a loggia which includes Margaret of Austria and Philip, daughter and son of  Maximilian of Hapsburg, Holy Roman Emperor (1).  The tapestry had become very grimy, fragile and structurally degraded over the centuries but thank goodness was saved in Aubusson, France,  at a cost of over £100,000.  Now the tapestry is restored to all its former glory.

In the loggia and at the forefront can be seen Margaret standing beside the future Charles VIII of France proudly displaying her engagement ring.  Charles would later renege on this engagement, oh the scoundrel, and marry Anne Duchess of Brittany in 1491. To compound the insult, Anne had already been married by proxy to Maximilian, his abandoned fiancée’s dad.  Yikes (2).   This of course helps to date the tapestry to c.1490 when Margaret and Charles were still betrothed.   Fortunately as the tapestry had probably been commissioned by Frederick the Wise, the tapestry, now somewhat awkward for those portrayed in it,  stayed intact and was not destroyed in a hissy fit.  What is amazing is how accurate and recognisable the facial features of those featured are and were without doubt based upon individual contemporary portraits because in actual fact Margaret, Philip and Charles were never in the same place leave alone same room at any one time.  Which probably was best for all concerned seeing as how the situation panned out.  However and moving on,  some of the characters still have to be officially identified which brings us to the two that are of most interest to those interested in the period now known as the Wars of the Roses – Margaret Duchess of Burgundy and Perkin Warbeck. 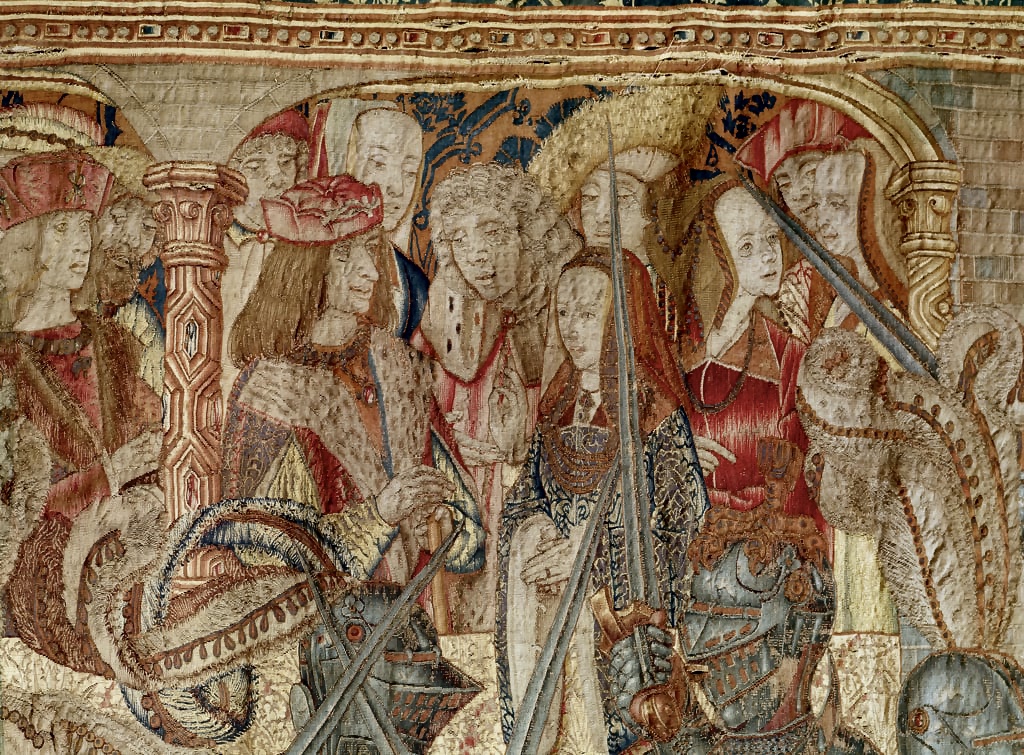 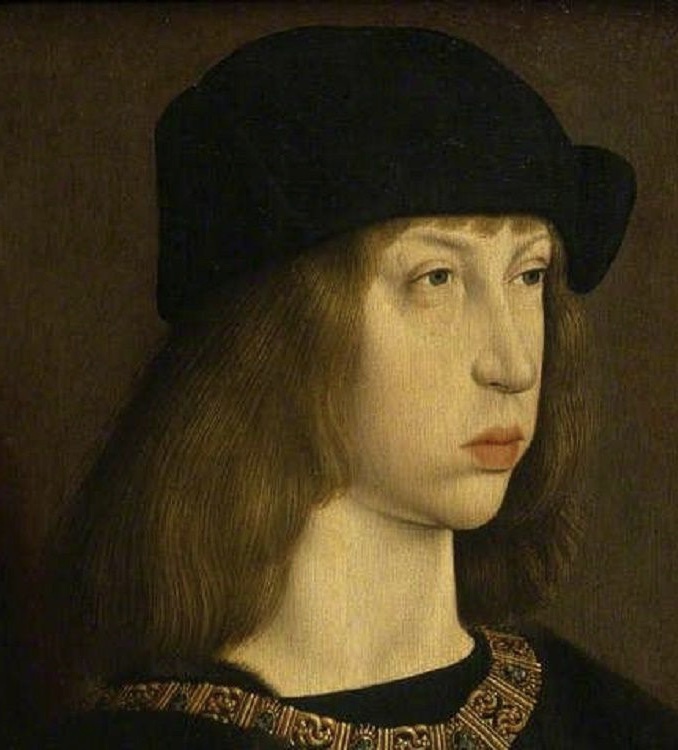 Philip Ist of Castile. Also known as Philip the Handsome (frustratingly it’s not known if the appendage to his name was apt  or an unknown person’s attempt at sarcasm).  His mother was the tragic Mary Duchess of Burgundy. 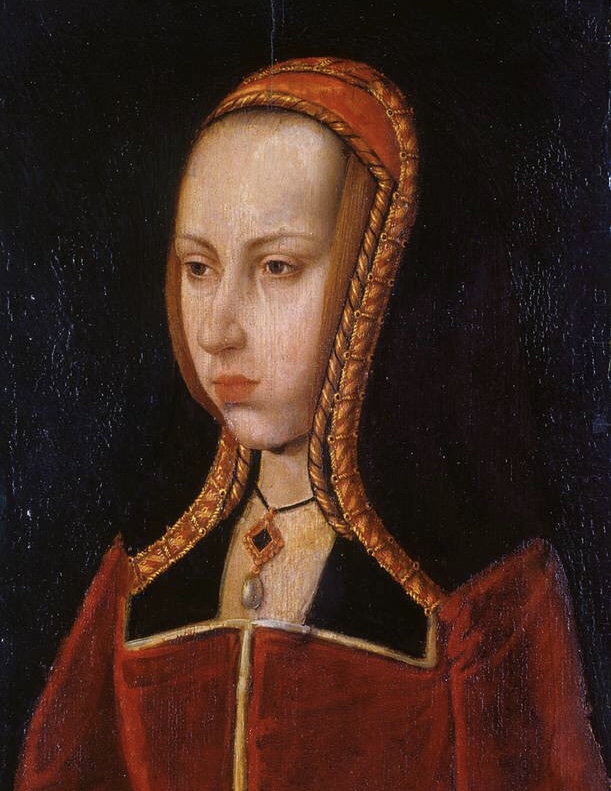 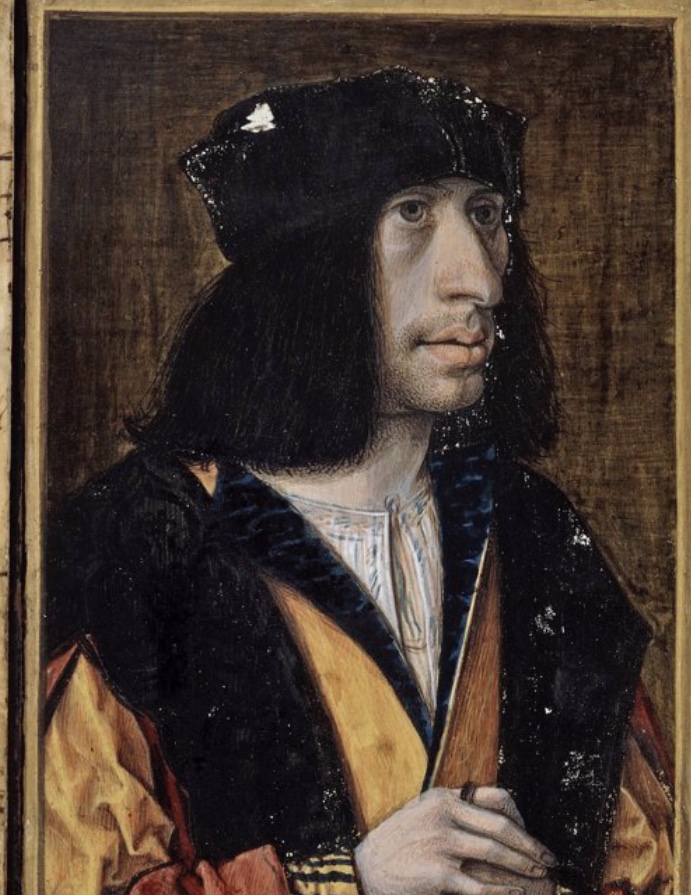 Charles VIII of France.  Slightly older than portrayed in the tapestry.  Perhaps  painted on the morning he woke up, and aged rapidly, as he realised he had just married the proxy wife of his abandoned fiancée’s father!  ‘Where am I, who am I?’ you can hear him mutter.  I joke of course…

So you can see from the above portraits the extraordinary talent of the weavers of this tapestry in capturing the portraits of the above so accurately.  Now we turn to the two figures on the left of the tapestry.  A beautiful, elegant lady stands next to a handsome young man.  This must be Margaret Plantagenet, Duchess of Burgundy and she has in her hand a gillyflower, known nowadays as a pink or carnation, which she holds close to the young man’s heart.  Surely the young  man must be Perkin Warbeck who claimed to be Richard Plantagenet, Duke of York.  The gillyflower was full of symbolism in the middle ages and was the device of,  if he were Richard, his mother,  Elizabeth Woodville. It’s unknown why Elizabeth chose this flower as her device but it has been suggested it may have symbolised virtuous love and marriage particularly marriage (3).   Was this an attempt to send a message to the onlooker that his parents had indeed been truly and legally married?    If so you may believe it or not as you will.  However moving on he does have  some kind of blemish or birthmark above his left eye as we view the portrait full on.   Where have we seen this before?  I believe, as does the author of the  article,  that this is indeed the young man known as Perkin Warbeck but who later revealed that he was none other than Richard, the youngest  ‘missing’ son of King Edward IV,  who had disappeared off the radar around 1483.  Compare the portrait from the tapestry to the famous pencil sketch of Warbeck. 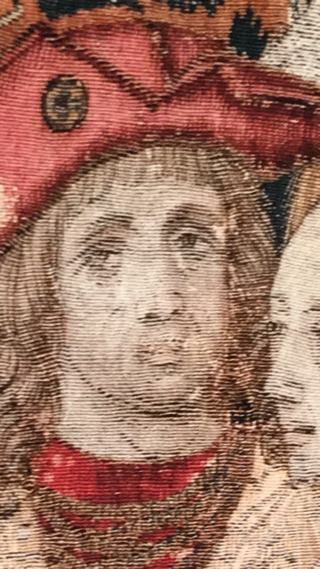 Warbeck/Richard from the tapestry.  Compare the blemish above the eye as well as the similar mouth to the pencil portrait below.. 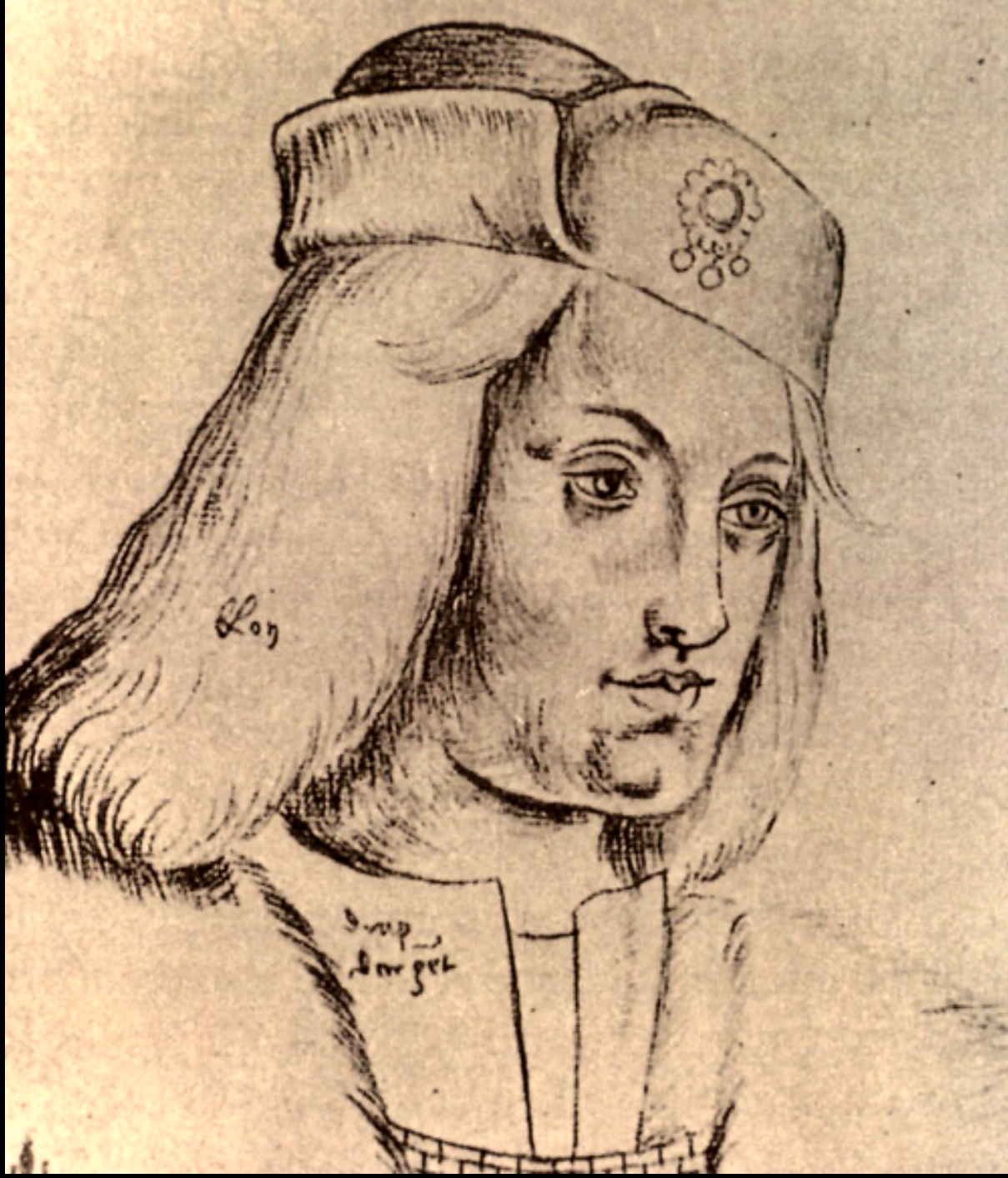 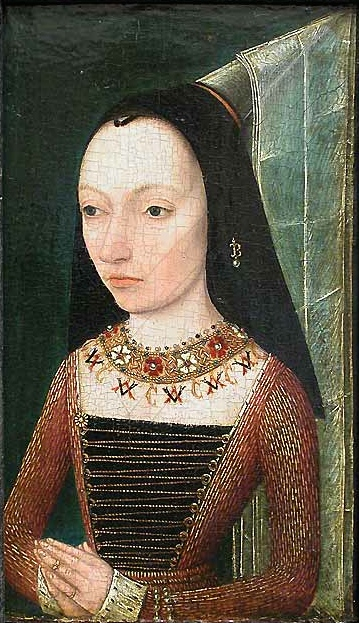 The well known portrait of a young Margaret Plantagenet, Duchess of Burgundy.  She was stepmother to Maximillan’s wife, the tragic Mary of Burgundy who had died after falling from her horse in 1482. Artist unknown. 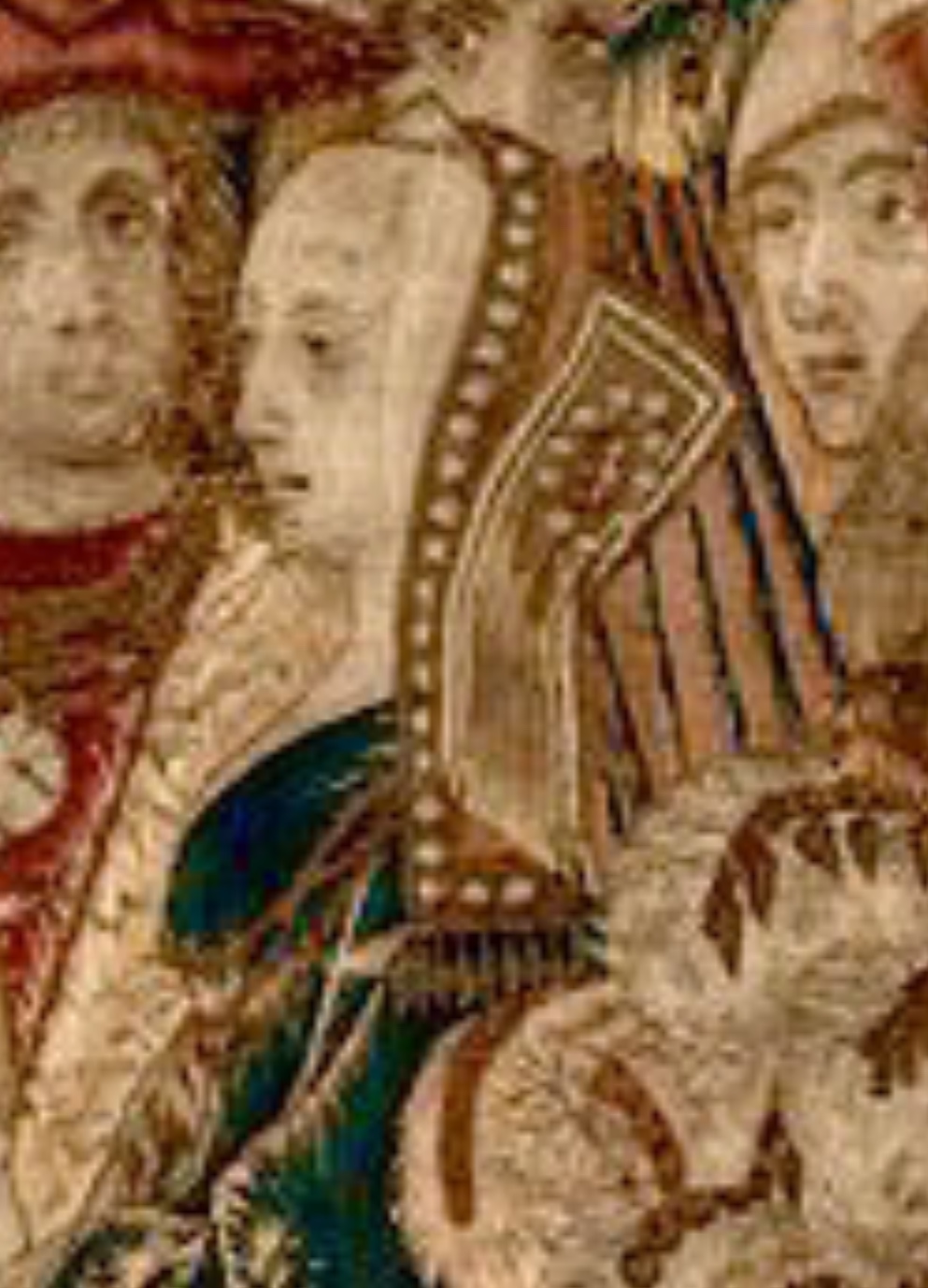 Margaret’s portrait from the tapestry.  Slightly older but still recognisable as the sitter in the painting.

So besides the sheet beauty of this tapestry what can be gleaned from it?  The fact that as well as Margaret Plantagenet, Duchess of Burgundy some of the crowned heads of Europe recognised Warbeck as the missing son of Edward IV.   Although things did not pan out well for Warbeck,  it should not be assumed that because of his failure he was nothing more than a pretender.  The uncomfortable question must remain – was the young man with the battered face who was executed at Tyburn on November 23rd, 1499 in actual fact Richard of Shrewsbury, Duke of York, the son of King Edward IV?

PERKIN WARBECK AND THE ASSAULTS ON THE GATES OF EXETER

A Portrait of Edward V and Perhaps Even a Resting Place?- St Matthew’s Church Coldridge

A PORTRAIT OF EDWARD V AND THE MYSTERY OF COLDRIDGE CHURCH…Part II A Guest Post by John Dike.

One thought on “THE TOURNAMENT TAPESTRY – PORTRAITS OF MARGARET OF BURGUNDY AND PERKIN WARBECK?”