Two metal detectorists have recently had a sumptous litte find.  A tiny gold bible beautifully engraved.  Which is great.  But what makes their find super great is that it is yet another discovery made near the remains of castles that were once Neville strongholds.  For this new find was found close to  a footpath on farmland near Sheriff Hutton and the previous two finds, the jewel now known as the Middleham Jewel and a ring were both found near, of course,  Middleham Castle.  This has led to speculation they were both owned by members of the Neville family.

The tiny gold bible.  The Yorkshire Museum had said that the figures depict St Leonard and St Margaret, both patron saints of childbirth.

Now – before I proceed any further I must give thanks to John Cherry, of the British Museum and his book The Middleham Jewel and Ring from which I have gleaned much of my information.   I recommend this book for anyone wanting to know all there is to know about the Jewel and the ring, especially the ring which sometimes gets overshadowed by the grandeur of the jewel.

This jewel which is nothing short of spectacular  was found in September 1985 next to a path which led from  Jervaulx Abbey to  Middleham Castle and then to Coverham Abbey  by a Mr Ted Seaton and initially was sold at auction by Mr Seaton and the owners of the land for £1.3 million.  However when it was deemed by The Reviewing Committee on the Export of Works of Art to be ‘outstanding’ the Yorkshire Museum mounted a fund raising campaign and managed to raise £2.5 million.  The jewel was thus saved for the nation. There is, pleasingly, at the back of the book a list of the donors who enabled the jewel to be saved for the nation.  Thank you very much, each and everyone of you!

The jewel consists of a gold lozenge shaped pendant 64 mm high and 48 mm wide weighing 62.65 grammes engraved with religious scenes and figures.  To the front is a beautiful sapphire,  a latin inscription and an engraving of the Trinity.  The back has figures of 15 saints, the Lamb of God and an engraving of the Nativity. Experts have dated it to the third quarter of the 15th century and it would have been worn as a pendant on a very rich lady’s necklace or collar.  There are several examples of similar pendants to be found on various effigies and  brasses as well as the drawings of the Rous Roll which features ladies of the Neville family.

Where would such a jewel, very likely a ‘specific commission’, have been made? John Cherry suggests London where large congregations of goldsmith were located in Cheapside.  There was, of course also goldsmiths on London Bridge aplenty which was a kind of medieval Bond Street.  Hmmm – perhaps – however there would surely have been goldsmiths in York?   There are small holes around the edges which indicate that when it left the goldsmith’s shop,  all sparkly and new,  it had a metalwork frame to which were attached pearls.  It must have been amazingly beautiful and it’s easy to imagine the joy of the lady who received it.  Was it a gift from an indulgent husband to his wife or had the lady commissioned the piece herself?

One of the illustrations from the book.  Detail from a border of a Flemish manuscript in the Bodleian Library, Oxford,  illustrating a similar jewel with its pearls intact.

The jewel was artfully designed so that by pressing against four of the saints the back slid open.  The sliding plate could be locked by means of the little key which turned a piece of gold inside the jewel.  This locking system no longer works.  Interestingly the jewel, which still retains remains of  enamelling in parts,  shows signs it was at sometime in its life repaired.  This would indicate it had been well worn and perhaps even passed on – perhaps mother to daughter?

The sapphire probably was not the only precious stone that adorned the jewel.  Amazingly there are signs this sapphire did not begin its life on the jewel but had been recycled as it is pierced along its sides as if it was once worn strung perhaps on a necklace before it was placed on the jewel in a prominent position above the exquisitely engraved Trinity.   This stone  itself served a dual purpose – that of protection plus devotion.

Around the edges of the front of the jewel is finely engraved Ecce agnus dei qui tollis peccata mundi (Behold the lamb of god who takes away the sins of the world). These words would have been recited by the priest in the Mass shortly before Communion and would have been very familiar to someone who lived in the 15th century  The first letter ‘E‘ still has remains of the original enamel.   The last two words of the inscription are Tetragrammaton, the four Hebrew letters used to indicate the name of God and Ananizapta, used as a magical word to protect against drunkenness or epilepsy.  These two words were believed to be  effective against illness and John Cherry believes that this would suggest the owner of the jewel was worried about health matters and would have looked upon the jewel as a protection against illness of even death.

So who was the original owner of the Middleham jewel?   Well if the dating is correct the most obvious candidate for that would be Anne Beauchamp (1426-1492) Countess of Warwick and wife to Richard Neville later known as the ‘Kingmaker.’ They were married as children and later Middleham Castle would be one of their homes.   Anne was not greatly fecund only having  two children that made it to adulthood.  She was however known for her care and comforting of women in labour – ‘Glad to be at and with women that traueld of chyld’  – so it’s conceivable the jewel with its nod to protecting ladies in pregnancy and labour would have had a strong appeal to her (1).  It’s poignant to remember that Anne’s skill and empathy to women in labour would have been never more needed than  on the 16th April 1470 when her own daughter, Isobel,  had the misfortune to go into labour onboard a ship, outside Calais,  that had been denied permission to land.   A truly horrendous situation for all involved and with the tragic result that the baby was either born dead or lived only a very short time and was buried at sea.

Could Anne have lost the jewel one day when she was travelling along that footpath close to her home?  Or bearing in mind that the jewel shows signs of wear and repair perhaps she gave it to her eldest daughter, Isobel who was to marry George Duke of Clarence and was to have, as far as is known, 4 children, two of whom died soon after birth including the little one born at sea.   When Isobel died on the 22 December 1476 aged 25 was the jewel returned to her mother who maybe then passed it to her youngest daughter Anne, then Duchess of Gloucester?  Middleham was the favourite home of the young duchess before she became queen.   Was Queen Anne the last owner and the one who lost the jewel?   Whoever it was it’s easy to imagine the distress its loss  would have caused the loser.  Perhaps it was  stolen and  lost by the thief making a hurried exit?   We will of course never know. 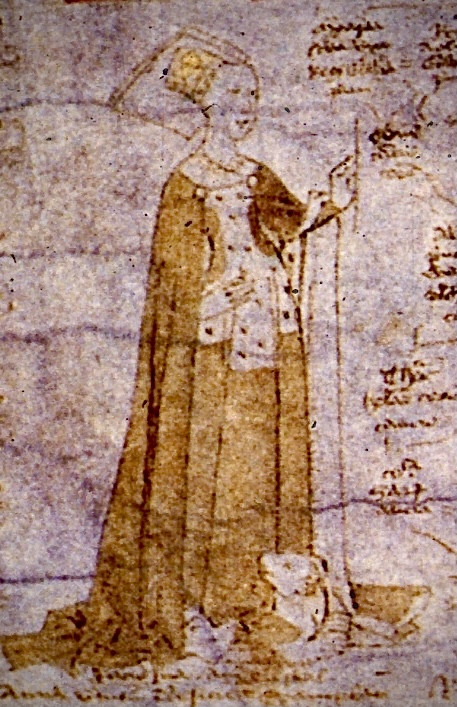 Interior of the ring which has been engraved with the word ‘Sovereynly’ which translates to ‘In a regal or sovereign like manner’  Photo : York Museums Trust

The exterior of the ring decorated with twelve esses similar to those found in the  livery collars of the Kings and Dukes of Lancaster including John of Gaunt.

The ring which is large, and designed to wear over a glove, was found in the East Park at Middleham, in September 1990.  Decorated with 12 esses,  the areas between the letters were originally enamelled black.  Thus the gold letters would have shone out.  The engraved  word ‘Sovereynly’  in the interior of the ring may be linked  to ‘Sovereyne’  which was the motto of Henry IV prior to him becoming king in 1399 and when he was the Earl of Derby and if so it would have been worn to indicate the wearer was a supporter of Henry or it may even have been a gift from him (2). 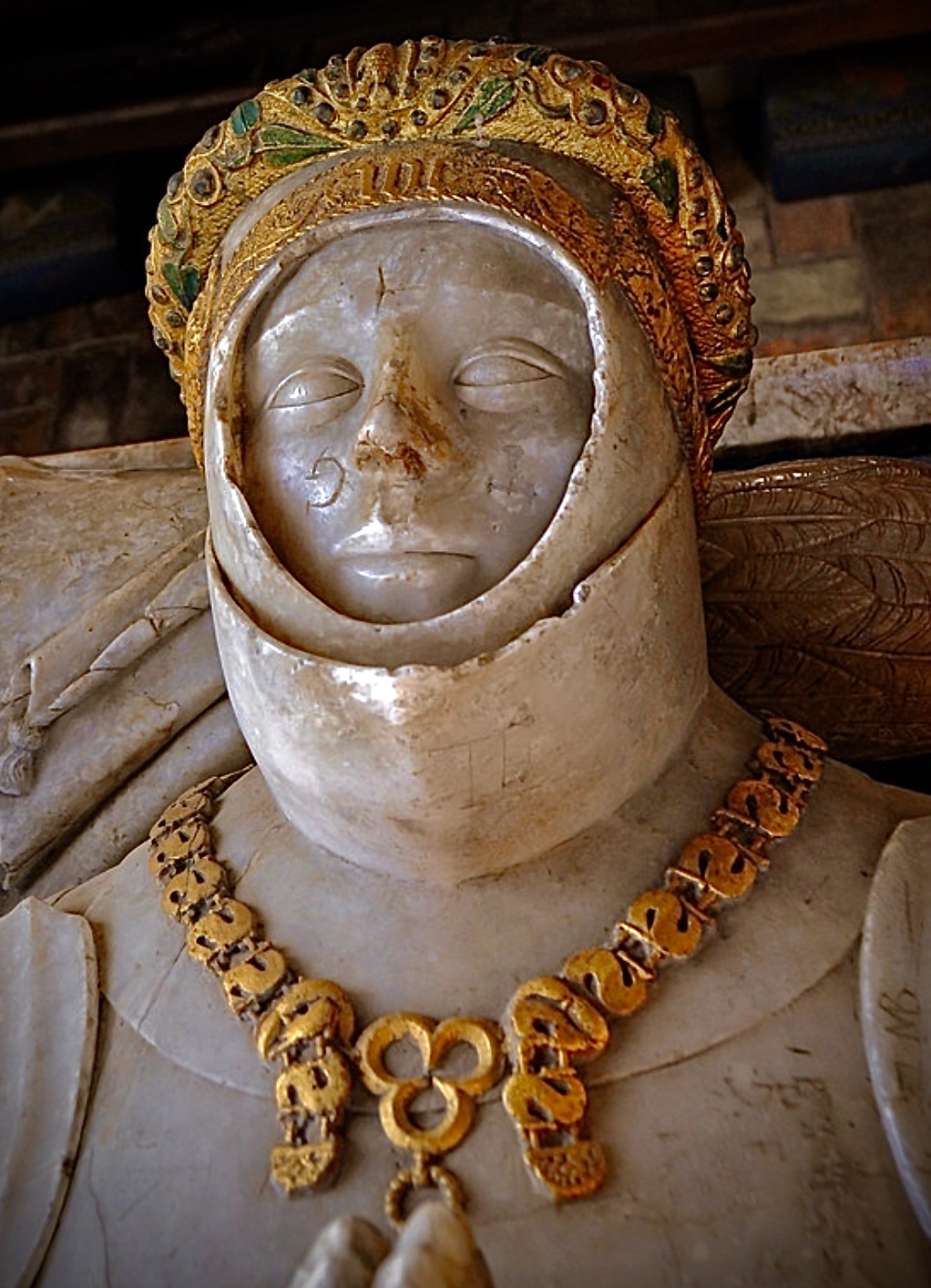 In the 1930s other objects were found when the moat was cleaned up including a  small copper alloy boar badge, which may have belonged to one of Richard IIIs retainers and which are now on loan to the Yorkshire Museum.  Let us hope these sublime and  important finds won’t be the last.

The Sisters Neville – Isobel, Duchess of Clarence and Queen Anne Neville, Daughters to the Kingmaker

CROSSRAIL – A PORTAL INTO MEDIEVAL LONDON

GEORGE DUKE OF CLARENCE, ISOBEL NEVILLE AND THE CLARENCE VAULT

4 thoughts on “ANOTHER PRECIOUS FIND TO ADD TO THE MIDDLEHAM JEWEL AND RING..”