Effigies of Ralph Neville 2nd Earl of Westmorland d.1491 and one of his wives.  Branchepeth Church, Durham.  These effigies, which were wooden, are now lost to us having since been destroyed by a disastrous fire in 1998.  Made in very dark oak it was difficult to get good photos of them thus we are indebted to Charles Stothard for this wonderful etching.  Photo British Museum.

Having seen a copy of Monumental Effigies on sale for £750 I quickly grasped it would be forever beyond my reach.   But wait! I found a very nice facsimile copy at an affordable price and very pleased am I….

The artist whose work this books covers ,Charles Alfred Stothard (1786-1821),  was a remarkably gifted antiquarian draughtsman.  Born in London, his father was an artist , Thomas Stothard R.A., and following in his footsteps Charles who as a child developed a ‘genius’ for drawing,  begun his career as a painter, his first work being The Death of Richard II at Pomfret Castle.  Charles based his depiction of Richard on his effigy in Westminster Abbey.  Was it then that first the idea took root to make etchings of the medieval effigies throughout England  to give other historical artists detailed and accurate descriptions of medieval costumes, armour and jewellery etc.,?   Whatever triggered the idea, in 1811 the first part of Monumental Effigies was published with others to follow periodically.  After his death his widow, Anna, re-issued the plates as a full volume in 1832.

Sometimes the life of a 19th century engraver of medieval monuments was far from easy.  But our Stothard was nothing more than resolute and once he had made his mind up, his mind up he had made! When confronted with difficulties in gaining a good vantage point for his drawing of Aveline Countess of Lancaster   whose monument in Westminster Abbey had been cut off from all daylight by a ‘lofty‘ and ornate 18th century cenotaph to Lord Ligonier (me: why, why why?),  our intrepid artist was undeterred. ‘ Never daunted by any difficulties which offered themselves to an antiquarian  pursuit, Mr Stothard  furnished his pockets with wax candles,  clay and a percussion tube (a German invention for producing fire).   Thus prepared he watched his opportunity,  scaled the monument of Lord Ligonier,  lit and fixed his candles and in the situation above described, smothered with dust,  actually completed the drawing of the beautiful monument which embellishes  his series of Effigies,  without the knowledge of any of the attendants  in the abbey’ (1). 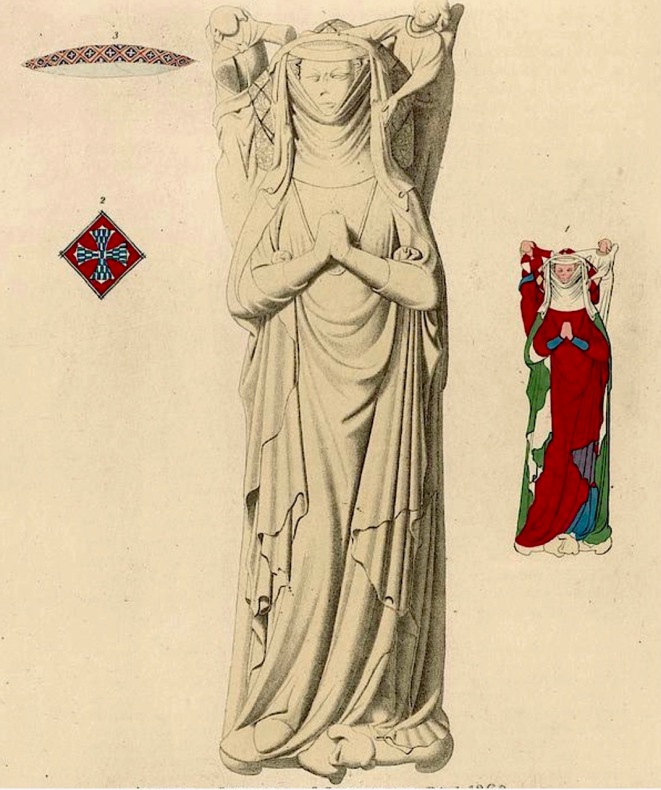 Tragedy was to strike in 1821 when on a working trip to St Andrew’s Church, Bere Ferrers,  Devon, while tracing a picture of a face from a stained glassed window, Charles fell from a ladder and was fatally injured.   He was, poignantly,  buried in the churchyard of St Andrews and a brass plaque dedicated to his memory can be found inside the church.   His intrepid widow would look after much of his work and on her death in 1883 she bequeathed his etchings to the British Museum.  Here below is just a small selection:

Two children of Edward III : William of Windsor and Blanche of the Tower.  Westminster Abbey.

Some of the engravings would also show details of headdresses, or jewellery in closer detail often hand coloured.   This is a close up of Blanche’s headdress. 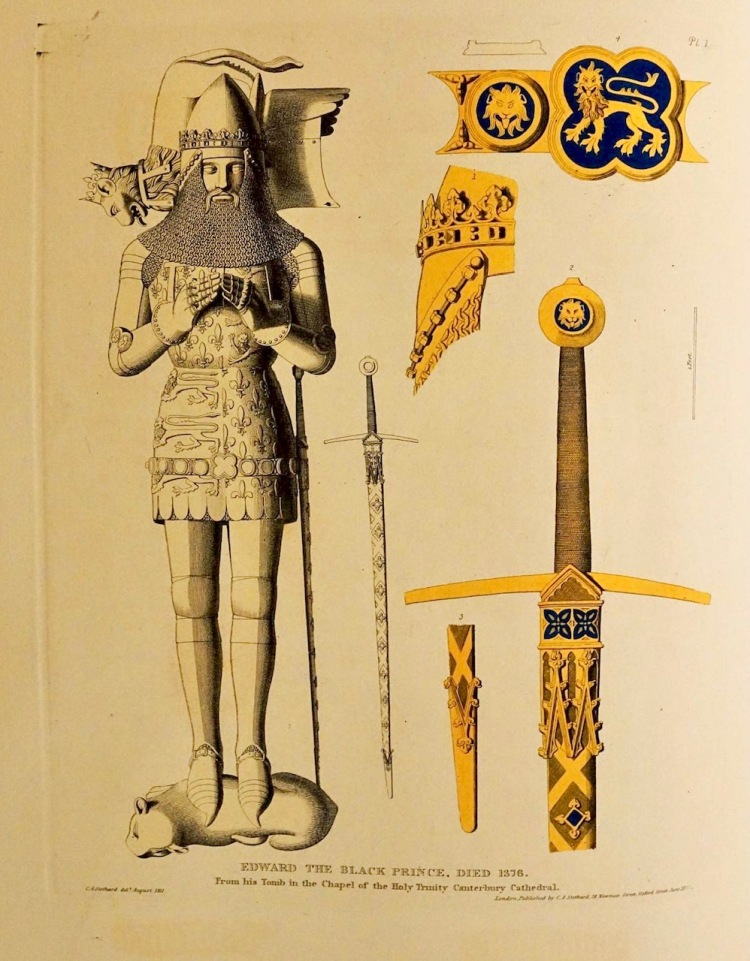 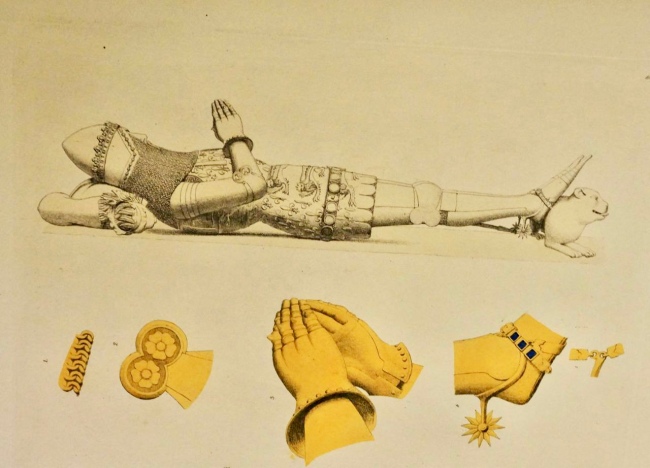 Detail of the sword of Edward of Woodstock, known as the Black Prince.  From his effigy in Canterbury Cathedral.  From the original engraving @ British Museum

Close up of Joan of Navarre’s exquisitely drawn crown.  When Charles Stothard created his engraving the effigies often had traces of their enamel work and paint still on them 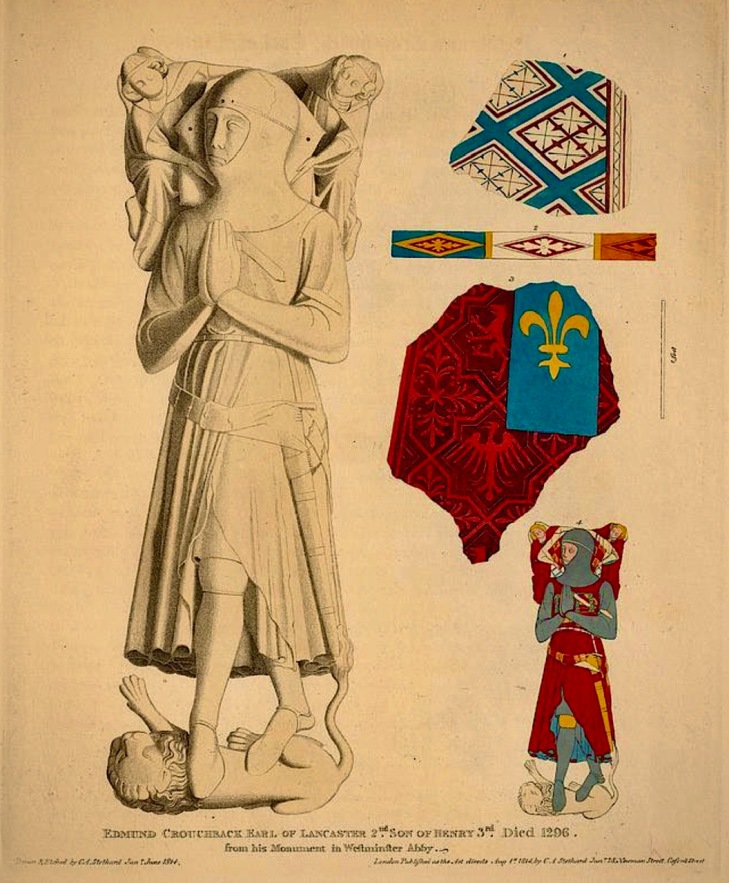 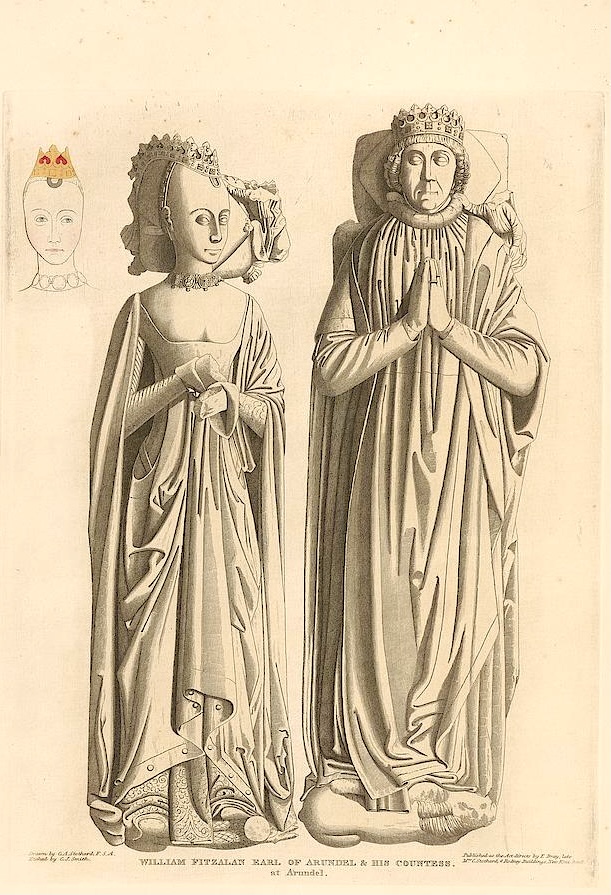 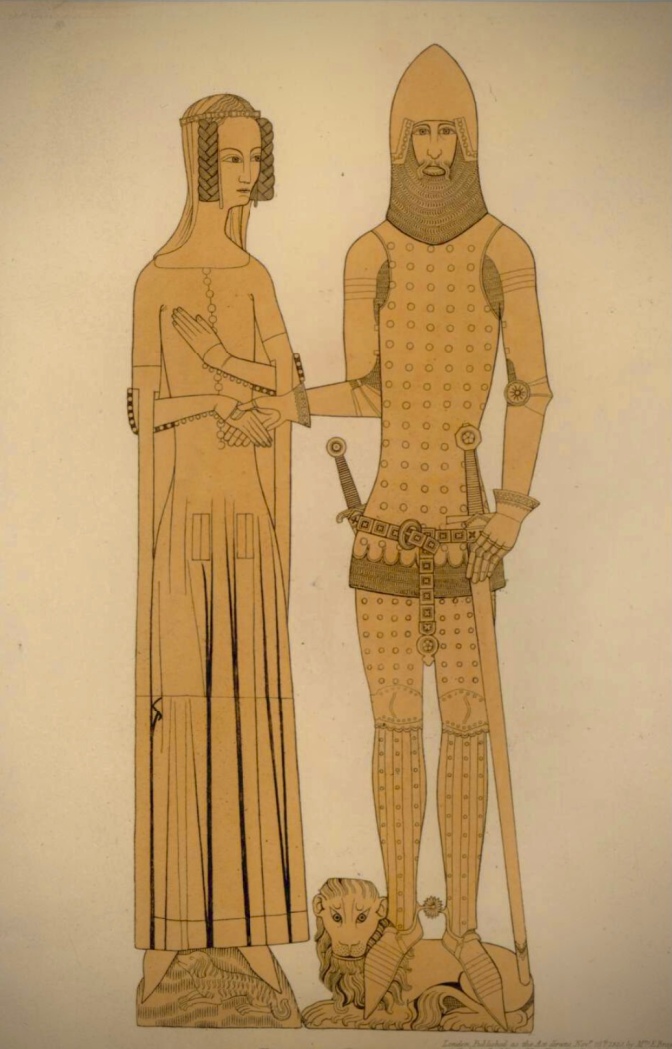 Etching of a brass.  Miles Stapleton and his wife.  Ingham Church Norfolk. 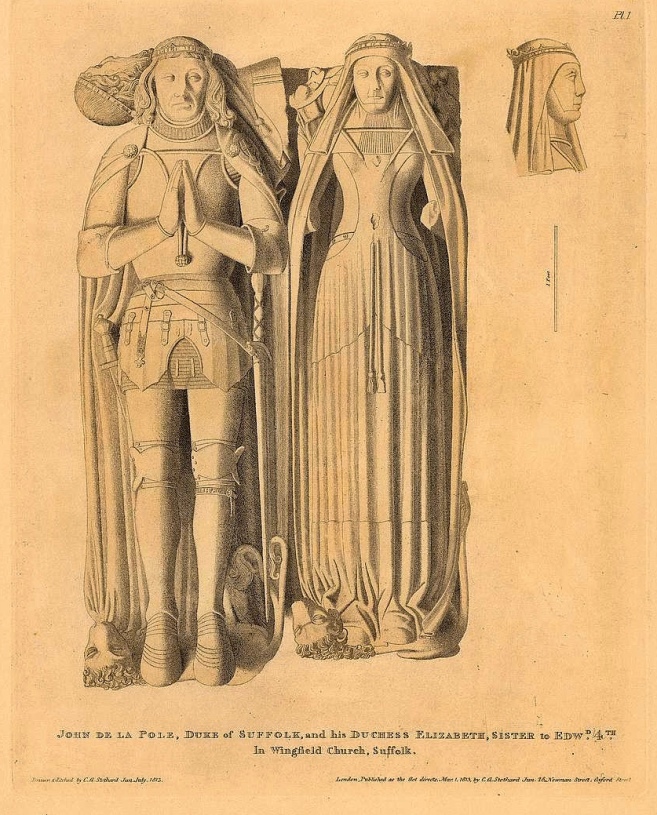 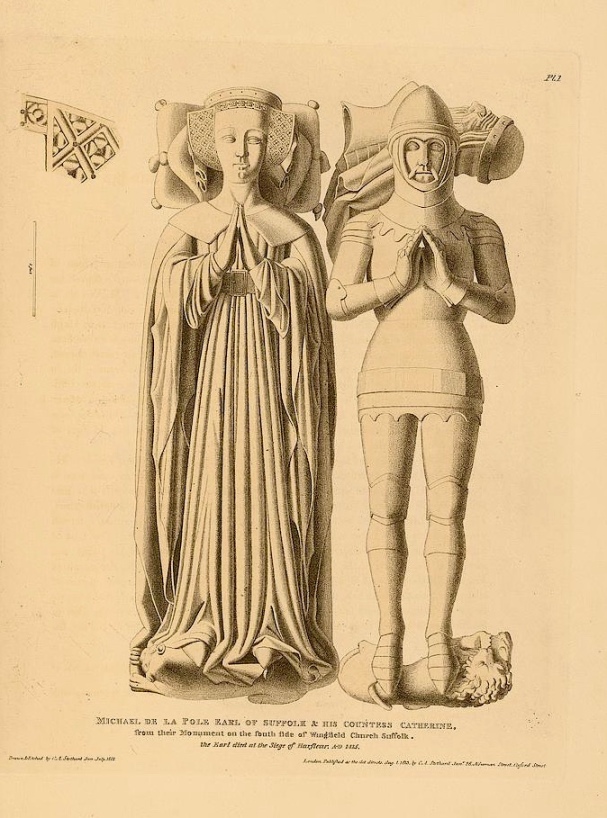 Michael de la Pole, Earl of Suffolk and his wife Catherine.  Wingfield Church, Suffolk. The Earl died during the seige of Harfleur 1415

All these and many, many more copies of his etchings are to be found in this beautiful book.    It’s sad that Charles Stothard died in a cruel accident before he had completed all his work but 142 are to be found in this book.  So his achievement was outstanding.   No doubt he would be pleasantly surprised that nearly 200 years after the publication of Monumental Effigies in 1832 his etchings are still pored over and enjoyed by lovers and scholars of all things medieval.  Thank you and Bravo Mr Stothard. 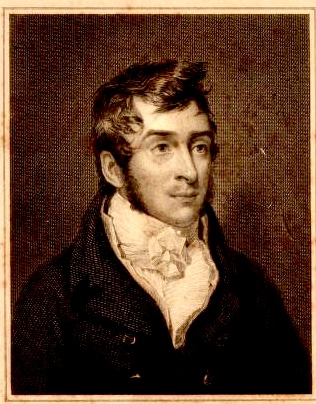 The Eton Wall Paintings – A Portrait of Queen Anne Neville

Canterbury Cathedral and the Royal Window

6 thoughts on “THE MONUMENTAL EFFIGIES OF GREAT BRITAIN : CHARLES A STOTHARD”