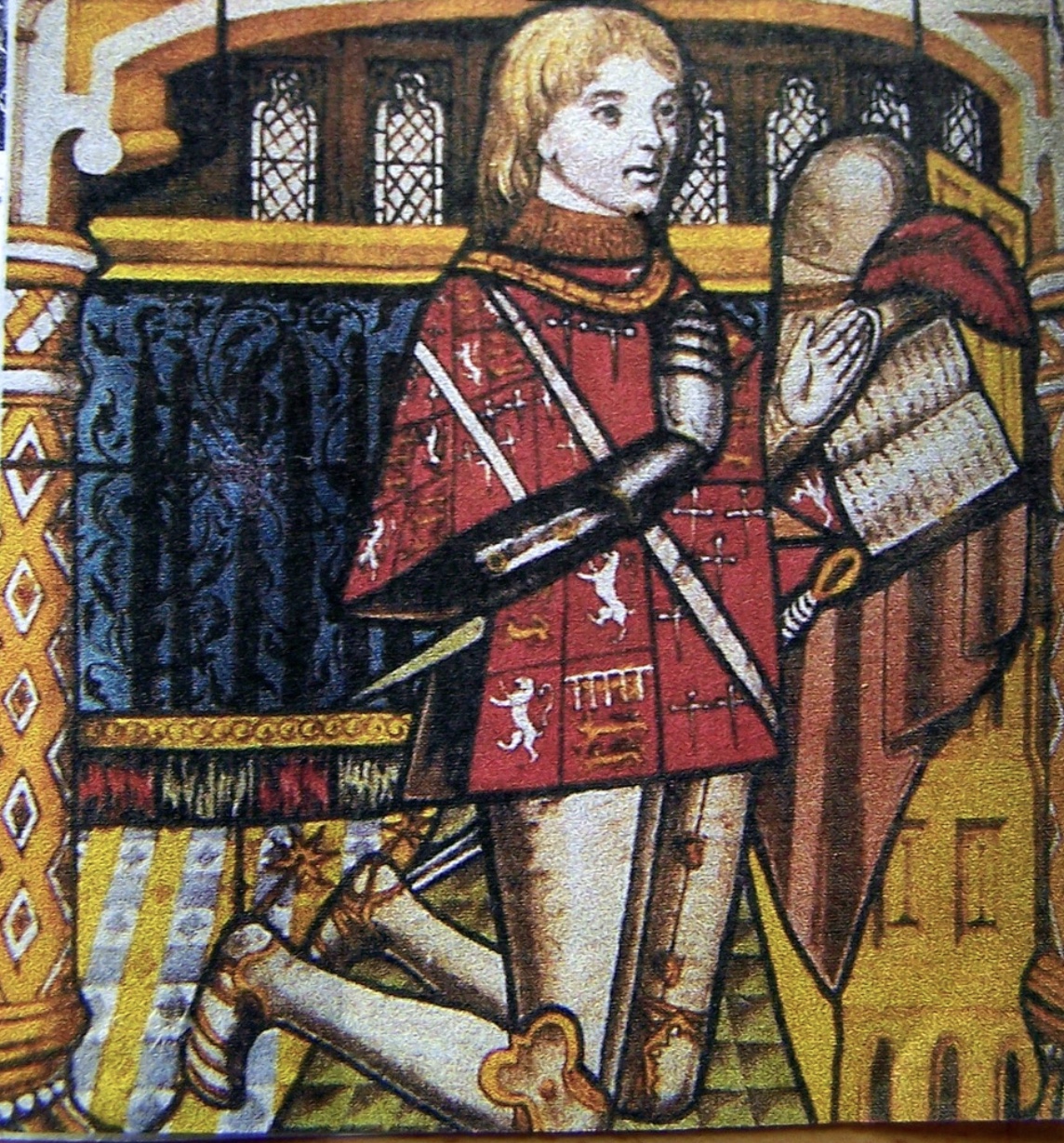 John Howard, what a colossus of a man – Admiral of England, member of the King’s  Council, Earl Marshal, Knight of the Garter, Treasurer of the Royal Household, High Sheriff , a great shipowner and much  more.  Described by Anne Crawford as ‘an extremely versatile royal servant, as a soldier, administrator and diplomate he had few equals among his contemporaries’(1).  A valiant soldier and loyal friend to King Richard III, dying with him at Bosworth in 1485.  Much has been recorded about him and there are good biographies to be had by both Anne Crawford ‘Yorkist Lord’,  and John Ashdown-Hill’s ‘Richard III’s Beloved Cousyn’ with the bonus of his household books surviving edited by Crawford.  The well known comment written, regarding an incident in Howard’s life,  by a John Jenney describing Howard as being ‘as wode as a Wilde bullok‘ indicates that he was neither  a pushover nor one to get the wrong side of (2).   There is also the remark made by Howard’s first wife, Catherine, aimed at John Paston and helpfully forwarded on to Paston by his brother Clement,  who wrote urgently advising  that he should get to where he had been summoned without delay and with a good excuse  as

‘Howard’s wife made her bost that if any of her husbands men might come to yow ther yulde goe noe penny for your life: and Howard hath with the Kings a great fellowship’ (3).

John Paston did indeed get himself to London and was promptly thrown into the Fleet prison for a short while.  Perhaps this move saved him from Howard’s ire so every cloud as they say.    But its not Howard’s professional life I want to focus on here but his private life for he was it would appear both a  caring father and a loving husband and Crawford has noted that when he was in London at his house in Stepney for any length of time his family and household would move there too.(4)

Brass of Catherine Howard nee Molines at Stoke by Nayland.  Engraved in 1535 with a Tudor headdress.  Catherine’s mantle has her husband’s arms on one side with the Molines on the other.

Although little is known about his relationship with his first wife, Catherine Moleyns (died November 1465) there are indications that his second marriage to Margaret Chedworth was a love match as the long list of valuable bridal gifts Howard ‘showered‘ on her has happily  survived and been included in the Paston Letters. The pair were married in ‘unseemly‘ haste six months after the death of Margaret’s second husband, John Norris of Bray,  and before Norris’ will, leaving most of his lands to his young widow provided she did not remarry, was proved.  Crawford writes  ‘Now a wealthy and eligible widower, Howard could well have looked for a second wife among the ranks of aristocratic widows or those who had personal connections, but his choice was at once more personal...’ (5).   Margaret was cousin to Anne Crosby nee Chedworth, wife to Sir John Crosby, builder of Crosby Hall  and  brought with her to Tendring Hall two daughters from her previous marriages.  Here is just a selection of the many gifts Lord Howard gave to his bride…

Ferst ij rynges of gold set with good dyamawntes, the wyche the quene yaff my master

Item, a nowche (brooch) of gold set with a fine safyre,  a grate balyse and v perles

Item, a ring of goolde with a fine rubye.

Item, my master gaff her a longe gowne of fyne cremysen velvet furred with menyver and purled with ermynes.

Item, my master gaff her vij scynnes  of fine ermynes.

Item, my master gaff her a lytell gerdyll of silk and goolde called a demysent and the harneys of goolde

Item, my master gaff here a coler of gold with xxxiii.roses and tonnes set on a corse of blank silk with an hanger of goolde garnished with a saphyre.

Item, my master gaff her iii. Agnus Dei of goolde.

Item, my master gaff her a cheyne of gold with a lock of gold garnished with  rubye.

Item, my master gaff her a long gown of murrey furred with menever and purfeled with ermyns 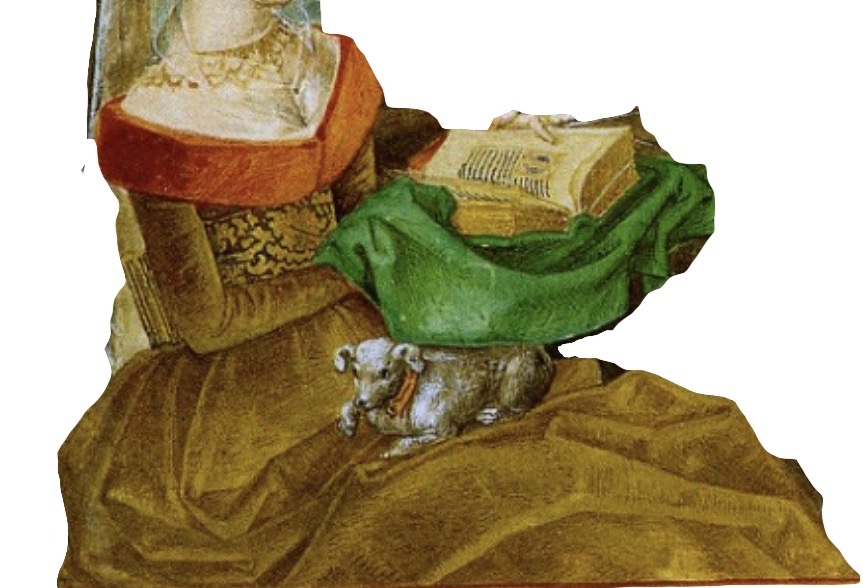 A Burgundian gown, possibly velvet, with broad highly decorative girdle (belt).  This would have been typical of the  type of gown Lord Howard gave to his wife.. 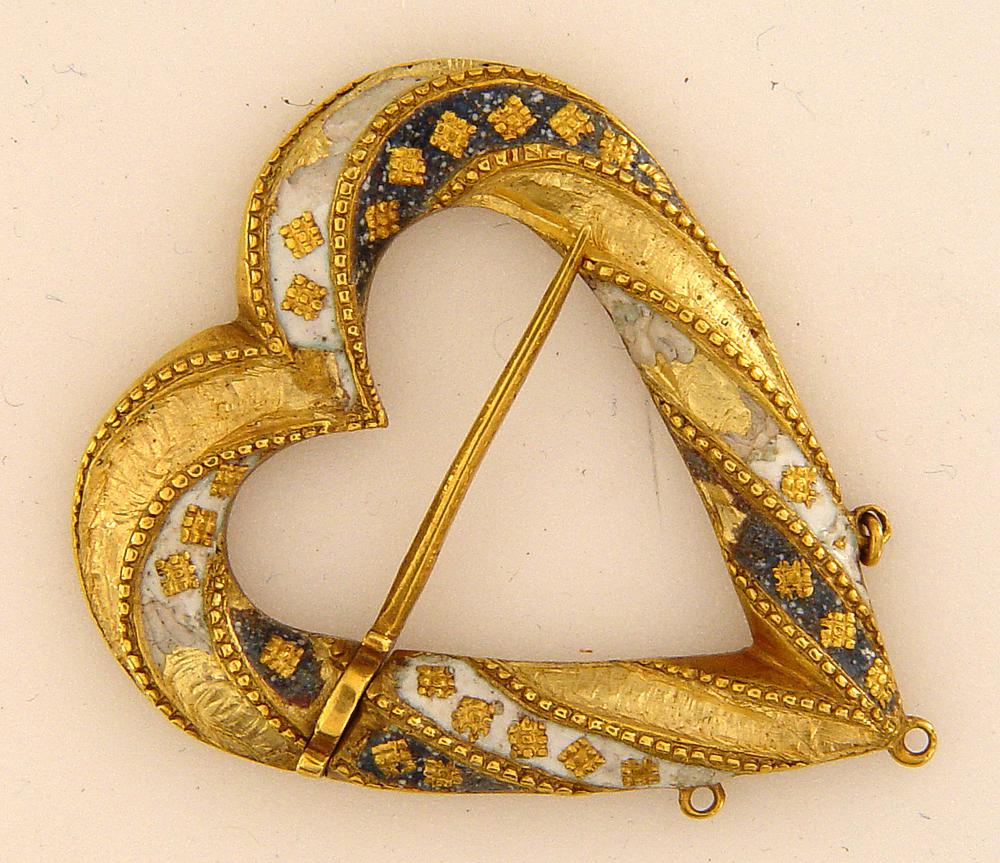 Gold and enamelled brooch from the 15th Fishpool Hoard 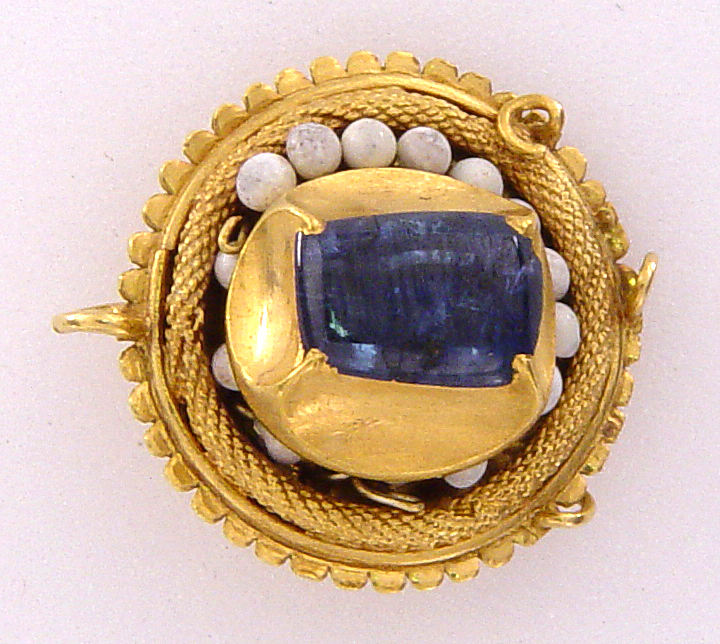 An English lady from the period.  Note the jewelled collar, the wide belt (girdle) and the numerous rings… 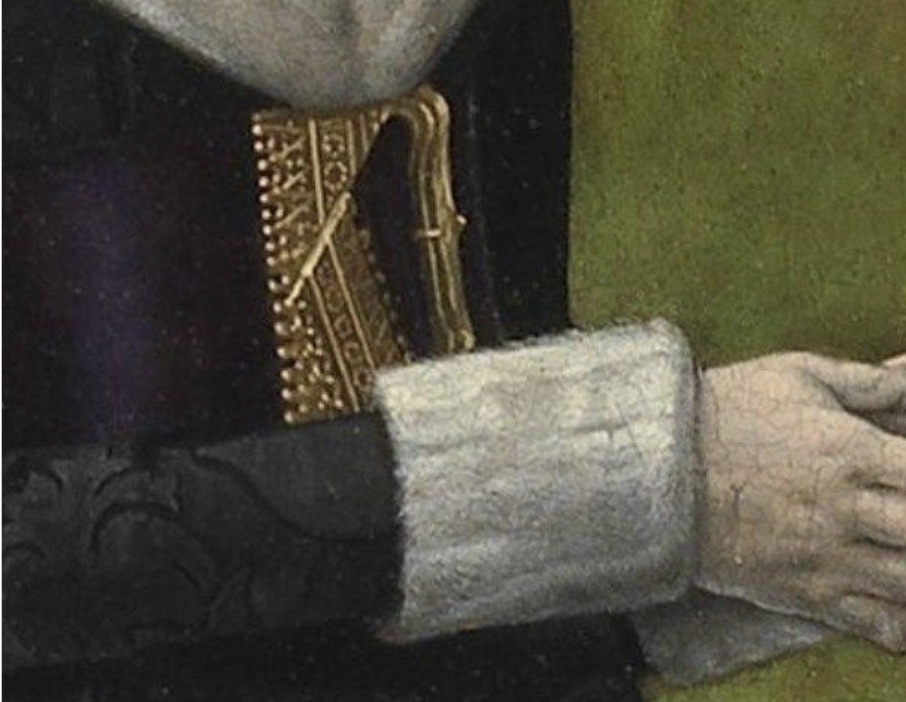 A belt (girdle) from the period..

Added in Sir John Howard’s own hand – And the vij.zere of the Kynge  and in the monithe of Janever I delivered my wyffe a pote of silver to pote in grene ginger that the Kynge  gaffe.

These are only a selection of the gifts, too numerous to mention here in full.    Also included were  several more gowns, rings,  gyrdles, holand clothe, Aras, cushions, silver spones, a bed with covers of cremysen damask and more..

The Howards marriage endured until he fell,  loyally fighting for his king, at Bosworth.   Anne Crawford writes that ‘despite his age (he was sixty, an old man for his time) he was there in the middle of his infantry line‘ and that ‘there is no doubt that if he had chosen to do so Howard could  have to terms with Henry before the battle as others did.  He could have despatched his force while remaining at home himself on the grounds of age and sickness.    The rhyme supposedly pinned to his tent the night before the battle warned him what to expect.. ‘Jockey of Norfolk be not so bold, for Dickon thy master is bought and sold‘.  For Howard these considerations were irrelevant: he owed his dukedom to Richard and if the house of York was threatened, then the house of Howard would be in arms to defend it.  He died as he had lived, serving the Yorkist kings’.(6)    Crawford also wrote ‘Howard had no need to participate in the actual battle.   He was nearly 60 years old and having brought up his forces he could have delegated command to his son and remained in the rear and nobody would have thought the worst of him for it,  given the sheer physical effort and stamina required to fight on foot and in armour.  He fought of course’.(7)   As to how Margaret felt about her husband’s insistence to fight —  did she scold, did she plead, cajole  or did she accept nothing would stop her husband from what he perceived as his duty is not known.  As I wrote, at the beginning of this article, what a colossus of a man.  John Howard, bravo, you did well!. 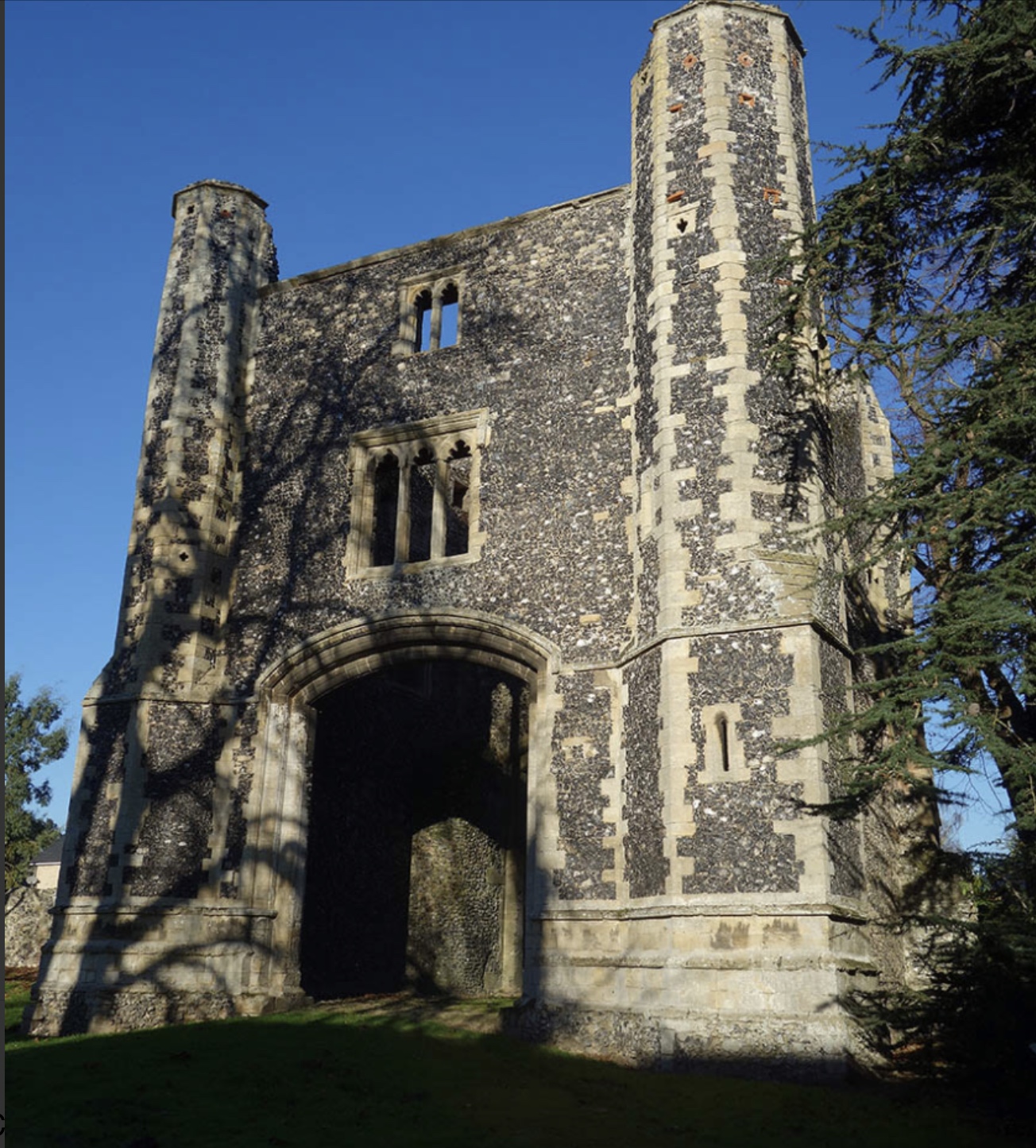 John Howard’s remains were eventually removed from Thetford Priory to probably Framlingham Church at the Dissolution of the Priories.  See John Ashdown-Hill’s ‘The Opening of the Tombs of the Dukes of Richmonds and Norfolk, Framlingham 1841’  The Ricardian vol. 18 (2008) 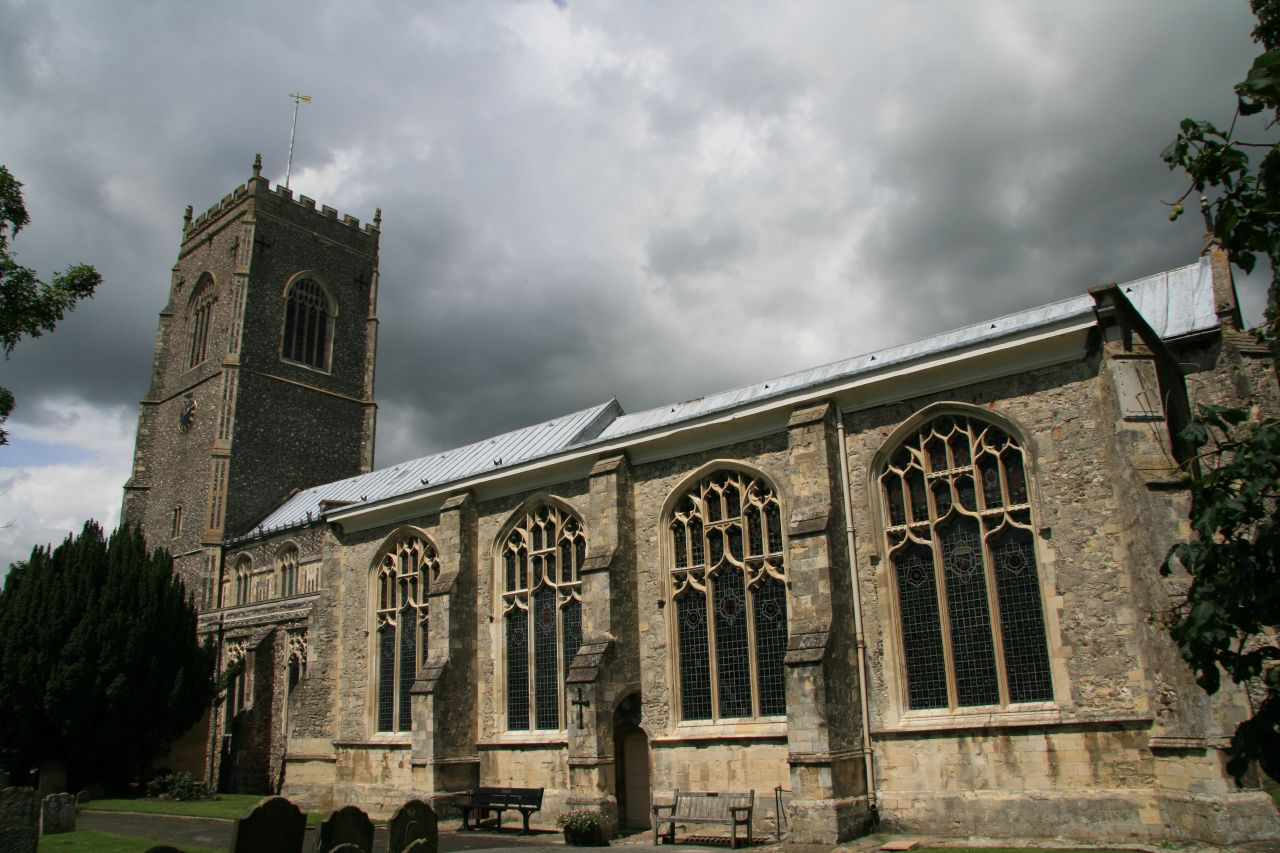 CROSBY PLACE – HOME TO THE DUKE AND DUCHESS OF GLOUCESTER 1483

2 thoughts on “JOHN HOWARD, DUKE OF NORFOLK – HIS WEDDING GIFTS TO MARGARET CHEDWORTH”